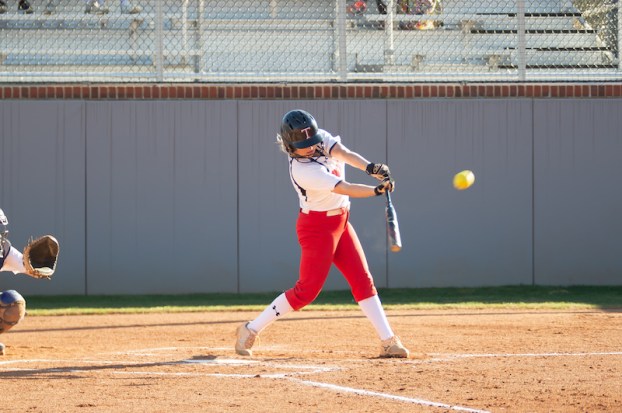 Thompson's softball team remained perfect in area play on Wednesday, April 10, with a dominant win over Hoover after scoring eight runs in the sixth inning. (File)

HOOVER – The remarkable 2019 softball season continued for the Thompson Warriors on Wednesday, April 10, as they hit the road to take on area foe Hoover and didn’t just walk away with a dominant 13-5 victory, but completed the regular-season sweep of the Bucs.

Now 4-0 in area play, the Warriors are wins against Tuscaloosa County and Oak Mountain away from finishing area play undefeated and with one more win against one of those two teams, they’ll also earn the right to host the area tournament.

Thompson took what was a close 5-5 game heading to the top of the sixth and busted the game wide open with an eight-run sixth inning to take command of the game before holding off Hoover over the bottom half of the sixth and the seventh to pick up the victory.

In the first inning of the game, both teams put a run on the board. Thompson got it started when Lauren Haskins hit a solo shot over the center-field wall for a 1-0 advantage in the top half.

That was quickly answered by the Bucs in the bottom of the first with a solo home run of their own to tie the game with one swing of the bat through the first inning.

The next big inning came in the third when Thompson strung together several hits for the first time in the game. It started with back-to-back doubles from Abby Kellogg and Kindall DeRamus with one out in the inning.

Haskins then picked up another two RBIs by driving both in with a single on a bunt that eventually ended with the Warriors up 3-1.

Hoover didn’t have an immediate answer, and in the top of the fourth, Thompson extended its lead on a wild pitch that allowed Madison Plunkett to score.

Down 4-1, the Bucs needed a big answer in the bottom of the fourth and got it with one swing thanks to a three-run home run that evened the game at 4-4 through four innings.

Thompson regained the lead in the top of the fifth on a sac fly that drove in Kennedy Foote, but the lead was short lived.

Hoover quickly came back with a run of its own in the bottom half of the inning. The run came on a wild pitch after back-to-back singles.

Now in a 5-5 game, the Warriors had seen success at the plate in the previous few innings and were ready to take the lead for good in the top of sixth.

Thompson did just that by scoring eight runs in the inning behind three doubles, three singles and a three-run home run from DeRamus.

With a 13-5 advantage, Eleanor DeBlock closed the final two outs with ease allowing just one more baserunner the rest of the way to give the Warriors the dominant win.

DeRamus led the Warriors at the plate with a 3-for-5 game featuring three RBIs and two runs scored, while Haskins went 2-for-4 with three RBIs and three runs scored. Foote added two RBIs after a 1-for-4 game. Ella Pate ended up 3-for-4 with one RBI, while Makenzie Munroe finished 2-for-3 with two RBIs.