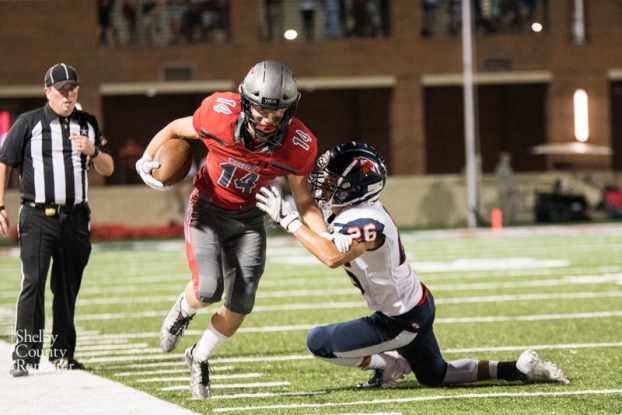 Thompson's Kyle Smoak has accepted a walk on offer from the University of Alabama to join the Crimson Tide's football team during the 2019 season. (File)

The 2018 football season didn’t end the way Kyle Smoak would have liked after a leg injury kept him from battling with his teammates during the majority of the playoffs and in the state championship game against Central-Phenix City, but the senior wide receiver for the Thompson Warriors left his mark on the field and made a name for himself, now some important people have taken notice.

Nick Saban and the Alabama staff sent Smoak a preferred walk on offer the week after he had signed with the University of Cumberlands, and now a few weeks after National Signing Day following a visit to the campus and talking with his family, Smoak has decided to accept that offer.

Originally, Smoak was one of 12 athletes to sign at Thompson’s signing day ceremony on Feb. 6 where he inked with Cumberlands, but the PWO from Alabama was tough to pass on.

While Smoak was a solid player as a junior with the Warriors, he really emerged during his senior year as the key guy.

During his junior season, he competed with both Mo and Ahmad Edwards for targets, and while he had to compete with others this year including Michael Pettway, AJ Bonham and JB Mitchell, he was always an open target that could make moves after the play.

Whether it be a check down from quarterback Taulia Tagovailoa or a designed route to run from the slot position, he was a gamechanger, and was sorely missed during Thompson’s playoff run.

Because of his ability to catch everything thrown his way, Smoak was named to the All-County First Team for his efforts on the field.

While he totaled 651 yards and four touchdowns on 53 receptions during his senior campaign, it was his sure-handed ability to change a game that earned him a spot as one of the best receivers in the county.

His best game of the season came against Oak Mountain where he totaled 162 yards on 11 receptions.

Now, he’ll have a great opportunity to stay close to home and be a part of one of the best teams in the country with several other players from the county, including his former quarterback, who loved him as a target during this past season.

By SETH HAGAN | Staff Writer ALABASTER – The Border War trophy will stay with the Pelham for at least one... read more