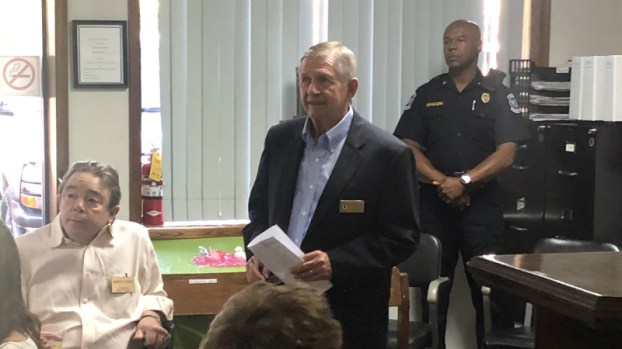 Vincent Mayor Ray McAllister speaks at a Coffee with the Mayor event on Wednesday, April 10. (CONTRIBUTED)

VINCENT – Vincent has undergone many positive changes in the past year, and a transformative donation from a new business in town will allow for more progress, Mayor Ray McAllister said on Wednesday, April 10.

McAllister spoke to Vincent residents and officials, and leaders from around Shelby County at the Coffee with the Mayor event sponsored by The Shelby County Chamber at Vincent Town Hall.

A landmark change for the town in the past year has been the opening of the Food Outlet grocery store.

“We’ve been a food desert for three or four years, and it’s not any fun,” McAllister said and added that a pharmacy will open in the store soon.

Other changes in the town include improvements at the park, three new police cars and renovations to the library.

“The library hadn’t had any work done on it in 20 years, so it was time,” McAllister said.

Shelby County has been a “wonderful” partner on projects in Vincent, the mayor said, such as a new park entrance.

“We’re proud of what we’ve done with a little bit of money,” McAllister said.

Going forward, a recent $600,000 donation from White Rock Quarries will be used to enact many needed changes, McAllister said.

When the company first moved to Vincent, officials said they would be “strong supporters of the community,” McAllister said.

An initial gift of $200,000 was used along with help from Shelby County and Shelby County Schools to build a new softball field, now called White Rock Park, at Vincent Middle High School.

Both VMHS and Vincent Elementary School will get $75,000 of the latest donation, McAllister said, with the VMHS portion planned to be used for a new athletics weight room and locker rooms.

The town also plans to use the money for a “major street paving effort,” and new fire truck and possibly a new senior/activity center.

A forum is planned for 6 p.m. on April 25 at the high school for residents to voice their opinions about the potential center, McAllister said.

“It’s too expensive to build something that’s not used, so we want to know what our people want,” he said.

Also, Vincent is preparing to put out for bid a project for sidewalks in the town as part of an Alabama Department of Transportation grant program.

Morris said he was thankful for the relationship among county government and municipalities in Shelby County, including Vincent.

By GRAHAM BROOKS / Staff Writer Amazingly, there only a few weeks remaining in the 2018-19 school year and once... read more