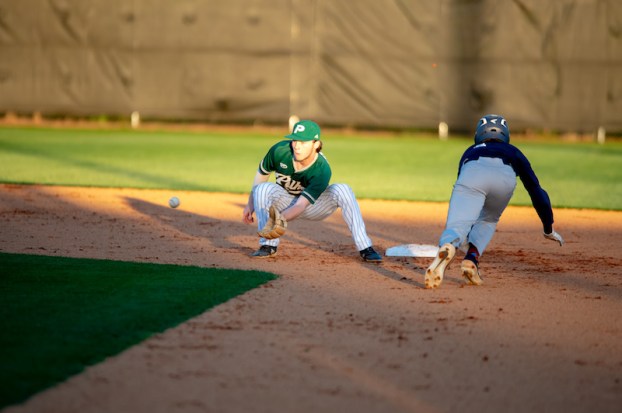 The Pelham Panthers closed out area play by sweeping a two-game series with county foe Calera. (For the Reporter/Larry Dancy)

A night after taking down area opponent Calera 5-1, the Pelham Panthers came back even stronger on Wednesday, April 10, to complete the series sweep with a 10-0 victory on their home field thanks to an eight-run second inning.

With the victory, the Panthers at least gave themselves a shot at the playoffs banking on Helena losing to Chelsea in the second game of their area series, which would force a play-in game between the Panthers and Huskies.

Either way, the dominant effort put forth by Pelham in their final area series of the season was impressive, and the eight-run second inning and strong pitching were the two keys in accomplishing the feat.

After a quiet first inning, the Panthers came to the plate in the second and made more than enough noise.

They started the inning with five singles in the first six at bats to drive in two runs before a triple from Phillip Duke drove in three more for a 5-0 advantage.

A sacrifice fly from Kasey Clark then added a sixth run, before a second triple in the inning from Hunter Stowe drove in Matthew Meddick for a 7-0 advantage. The final run of the damaging inning came on an RBI single from Kyle Camlic.

That was more than enough for the combination of Nate Rottier, Carter Reid and Camlic on the mound, as the three pitchers combined to toss the shutout in a shortened six-inning victory.

Pelham added to its lead in the third and sixth innings with one run apiece in each of those innings to pick up the 10-run rule win.

Calera struggled to get its bats going and had just three hits in the game.

A recap from the first game is below.

Calera’s struggles at the plate in the series started in the first game, while Pelham started off quickly. Using three runs in the first inning, the Panthers went on to score two more in the middle of the game, while giving up just three hits and one final-inning run to pick up the 5-1 victory.

Pelham’s three runs in the top of the first came with one swing of the bat. Following a leadoff double from Ferguson and a single from Duke, Clark blasted a three-run homer to right field that quickly put the Panthers on top 3-0.

That was more than enough cushion for Ferguson on the mound, who went on to pitch six shutout innings, before giving up just one run in the bottom of the seventh to pick up the complete-game win.

He finished the night allowing three hits and one run while striking out nine of the batters he faced.

Pelham added one run apiece in the fourth and fifth to complete the 5-1 victory. Those two runs came on an RBI double from Ferguson and an RBI single from Stowe.

Alijah Franklin and Jaxon Butterworth led Calera. Butterworth went 2-for-3 with an RBI, while Franklin went 1-for-3.