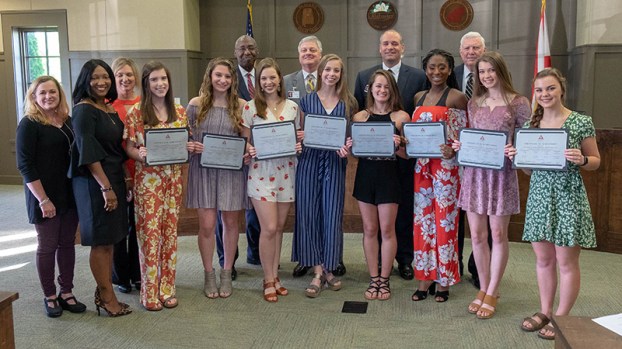 Members of the Thompson High School Warriorettes Dance Team are honored by Alabaster School Board members during an April 8 meeting. (Reporter Photo/Neal Wagner)

ALABASTER – The Alabaster Board of Education shined the spotlight on a successful Thompson High School team during an April 8 meeting, shortly after the team brought home plenty of hardware during the 2019 competition season.

During the 2019 competition season, the dance team, which is sponsored by Zandra Morris, placed first in the kick and pom categories at the Dance Team Union Northern Alabama Regional competition, and were crowned champions overall in the kick category.

At the American All-Stars Southeastern Regionals, the team placed first in the kick and pom categories.

While competing at the National Dance Alliance North Alabama Regional competition, the team placed first in kick, first in pom and first in hip-hop.

At the Dance Team Union national competition, the team made it to the finals in the kick and hip-hop categories, and placed fifth in kick and 10th in hip-hop out of all teams competing.

Members of the dance team recognized during the meeting were:

By Nathan Howell / Staff Writer   With Easter being one of the most widely observed holidays among Americans, the... read more