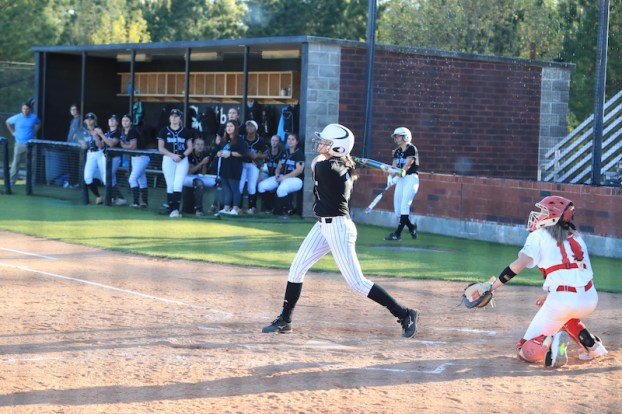 Spain Park’s Maddie Majors blasted a walk-off home run against Hewitt-Trussville on Wednesday, April 10, to leave the Jags in solo first in the area standings. (File)

After battling back to tie the game in the sixth with an error and putting the Huskies down in order in the top of the seventh, the Jags stepped to the plate looking to win the area matchup in the home half of the final inning.

With Annabelle Widra aboard after walking to lead off the inning, and then Taylor Harrington laying down a sacrifice bunt to move her into scoring position, Maddie Majors stepped to the play.

She took one swing, and left no doubt when she drove the ball deep to dead center field clearing the fence for a two-run home run for the 4-2 walk-off victory.

The clutch hit by Majors had big area implications for the Jaguars, who now control their own destiny in winning the regular season area title to earn hosting rights for the area tournament.

Now 4-1 overall in area play with a matchup against last-place Mountain Brook, the Jags hold the advantage over Vestavia Hills who is currently 3-2. The only way Spain Park wouldn’t host the area tournament is if the Rebels win their final area game against Hewitt-Trussville and the Jags lose to the Spartans, who they beat 19-0 earlier in the season. That would set up a coin flip to determine the host.

Through the first five innings of the matchup, Spain Park was able to maintain a 1-0 lead after scoring on an RBI single from Lindsay Parker.

It looked like that would be plenty for Widra in the circle, who had allowed just five baserunners through the first five innings, including just one hit.

That changed in the top of the sixth, however, as the Huskies singled to start the inning before an intentional walk put runners on first and second with no outs.

That was followed by two consecutive strikeouts from Widra to bring the Jags within an out of getting out of the jam, but an RBI single and a an error allowed two runs to score, which gave Hewitt a 2-1 advantage late in the contest.

With Spain Park having struggled to bring runs home as well, that shock of losing the lead could have had a big impact on the team’s confidence at the plate, but instead, the Jags came right back with an answer.

An error and a single allowed both Lydia Coleman and Parker to reach base. Then with two down in the inning, an error by the Hewitt third baseman led to courtesy runner Emma Jolley crossing the plate for the game-tying run before the final out was recorded.

After Widra stepped back in the circle with confidence and put the Huskies down in order, the Jags took advantage of the momentum swing as Majors blasted the walk-off homer to win the game.

Majors led the team with a 2-for-4 game featuring two RBIs and one run scored. Bailey Bowers went 2-for-3 with a run scored and Parker went 2-for-2 with an RBI.

Widra got the complete-game win allowing just three hits and two runs while striking out nine.

By ALEC ETHEREDGE | Sports Editor NORTH SHELBY – A few weeks ago, not many people saw this coming. After... read more