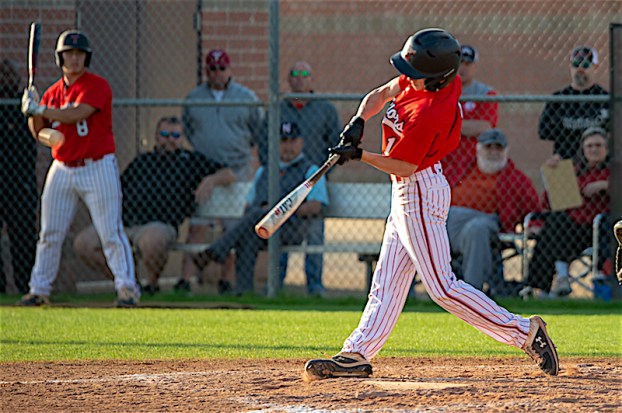 Thompson is now 2-2 in area play following a series with Tuscaloosa County and will go into the final week of the season looking to clinch a playoff spot. (For the Reporter/Larry Dancy)

TUSCALOOSA – It wasn’t the series the Thompson Warriors had hoped for, but with a 7-1 victory in game two of a three-game series with area foe Tuscaloosa County on Thursday, April 11, the Warriors salvaged a big victory to improve to 2-2 in area play.

Thompson lost the opener of the series 4-1 and lost the finale 3-2, as the bats failed to cooperate, but with only the first two games of the series counting toward the area standings, the Warriors are in decent shape following a split with Oak Mountain the week before and an upcoming series against Hoover.

They still control their own destiny. With two wins against Hoover, they’ll be playoff bound and likely area champs, while a loss or two would set up tiebreaker scenarios when it comes to a playoff spot. The Warriors hold a tiebreaker over Oak Mountain and would lose in a tiebreaker with Tuscaloosa County.

In both losses to the Wildcats, Thompson led late in the game, but failed to hold on for the victories due to either leaving runners on base or struggling to pick up hits.

In the first game of the series, the Warriors pulled ahead 1-0 in the bottom of the fourth and held that lead through five innings, but then gave up four unanswered in the final two innings to fall 4-1.

Tuscaloosa County, however, did exactly what it needed to in the clutch. The Wildcats got a two-run single to tie the game, and then down to their final strike, a ground ball ended in an error by Thompson that gave TCHS a walk-off victory with two outs in the inning.

Thompson left eight runners on base and outhit the Wildcats 8-7, which made the loss frustrating, but it did carry over from a dominant effort at the plate in the first game, which is the kind of consistency the Warriors needed to see moving into the final week of area play.

In the middle game of the series, and an extremely important contest for Thompson after the opening-game loss, the Warriors picked up 10 hits to pick up a 7-1 victory.

While THS didn’t score until the final two innings and trailed 1-0 heading to the sixth, a combined seven runs, including six in the sixth, allowed them to storm in front for the big win.

The Wildcats took their 1-0 advantage in the bottom of the fourth thanks to back-to-back doubles, but other than that, there weren’t many more opportunities with Harrison Poplin locked in on the mound.

Poplin was the highlight for Thompson through the first five innings of the game, as the Warriors struggled to score runs. He went on to finish off the contest with a complete-game effort allowing four hits and that lone run with four strikeouts.

The biggest thing he did on the mound was give the bats as much time to wake up as they needed, and once they did, they helped out their starting pitcher.

Thompson got the top of the sixth started off with a leadoff double from Nick Freeman followed by back-to-back singles from Breydon Edmondson and Grayton Arrington. The single from Arrington ended with an RBI as Freeman crossed the plate to tie the game 1-1.

A sac bunt from Josh Mehmen put an out on the board but moved both base runners into scoring position.

Then came a big hit from Daulton Byford, who drove in both baserunners with a two-run double to left field. Cade Watts then singled to center field to continue the threat and put runners on the corners.

Following a second out, Thompson closed the inning out with two more big hits from Trey Puckett and Carson Hobbs.

Puckett hit a two-RBI single to put the Warriors on top 5-1, before Hobbs doubled to left field to drive Puckett home for a 6-1 lead.

The Wildcats threatened with two baserunners in the bottom of the sixth, but a double play ended the threat and sent the game to its final inning.

In the top of the seventh, the Warriors added one more insurance run after walks from Mehmen and Watts and a single from Will Hoffman loaded the bases.

While Thompson was unable to get another hit, a wild pitch allowed Mehmen to cross the plate for a 7-1 lead heading to the home half.

An error allowed the leadoff batter to reach in the bottom of the seventh, but that was followed by three consecutive outs to complete the win.

Hobbs and Edmondson had a team-high two hits in the game, while Hobbs added one RBI. Byford and Puckett both went 1-for-3 and tied for a team high with two RBIs. A total of eight players picked up at least one hit in the win.

The Warriors went into the final week of the season controlling their own destiny last year as well, but a heartbreaking 5-4 walk-off loss to Vestavia Hills ended their season in heartbreak.

This year, they’ll have the same opportunity, but against No. 2 ranked Hoover. With a bitter taste still in their mouths from last year, it will be interesting to see how much fight and hunger they play with to punch a ticket to the playoffs.