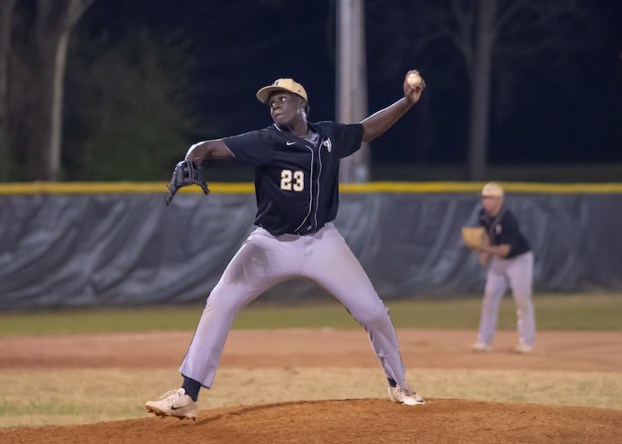 Vincent didn’t end up winning the Class 4A Area 9 championship, but did pick up one win against Sumiton Christian, and is headed to the postseason. (For the Reporter/Larry Dancy)

The Vincent Yellow Jackets are playoff bound after finishing second in Class 2A Area 9 between Wednesday, April 10, and Thursday, April 11, after their series with Sumiton Christian.

Vincent entered its series with the Eagles looking for the area crown with both teams needing to win two of three games to accomplish the feat.

Sumiton Christian, however, came out firing in the first game picking up 14 hits to Vincent’s two hits, which allowed the Eagles to pull away with ease for a 16-4 victory. They scored five in the first, six in the second, four in the third and one in the fourth to complete the win in five innings.

While the Jackets held Sumiton Christian to two runs in the game, they gave up 10 more hits, which meant the Eagles were threatening the entire contest.

Robbie Albright, however, got out of several jams on the mound in a complete-game effort as he forced the Eagles to leave 10 runners on base.

While he allowed 10 hits and two earned runs, he struck out seven batters and kept his team in the game.

At the plate, however, Vincent’s bats still continued to struggle. The Yellow Jackets picked up just four hits in the game, two from Dalton Gowers and two from Griffin Martin, but all five baserunners that reached in the game were stranded to keep them from scoring in the 2-0 loss.

With the two wins for the Eagles, they had locked up the area championship, but the two teams still played one final game in the series, which gave Vincent a chance to salvage a win and gain some confidence ahead of the playoffs, which start on Friday, April 19.

The Yellow Jackets still only picked up four hits in the game, but they made those hits count posting five runs in the first three innings to pull off a 5-2 victory.

A key part in that victory was the pitching of Jamichael King, who was locked in on the mound and struck out an astonishing 16 of the 26 batters he faced. He also allowed just two hits and two runs in the complete-game victory.

Vincent got off to a solid start in the bottom of the first by loading the bases, as a sacrifice fly Zachary Carlisle drove in the first run of the game for a 1-0 lead through one inning of play.

After a quiet second inning, the Yellow Jackets put together their best inning of the series in the bottom of the third.

Gabriel Schiller and Albright led off the inning with back-to-back singles. Schiller was eventually caught stealing third to put the first out on the board, but that didn’t stop an aggressive inning on the base path from the Jackets.

Derek Ayala walked to put runners on first and second, but both he and Albright eventually moved into scoring position after a double steal.

That paved the way for a grounder from Carlisle to score Albright as his hit ended in an error by the shortstop to put Vincent up 2-0.

With Ayala now on third, he quickly made it 3-0 when an error by the catcher allowed him to sprint home.

Mistakes continued to pile up for the Eagles when another error on a ground ball from Hunter Burnette allowed another run to cross the plate after Carlisle had stolen another base earlier in the at bat for the Jackets.

The final run of the inning came on another smart base-running decision when the Jackets pulled off a hit-and-run. Burnette took off for second, while Joshua Hayes lined a single to center field to bring Burnette home all the way from first for a 5-0 Vincent lead through three innings.

Sumiton Christian added two runs in the top of the sixth, but King’s performance on the mound aside from that was flawless, as he preserved the Jackets’ lead and gave them the 5-2 victory.

Albright had a team-high two hits in the game going 2-for-3 with a run scored, while Schiller and Hayes both went 1-for-3. Carlisle posted a team-high two RBIs, while Hayes added the other RBI.