COLUMBIANA – Children who came into the Columbiana Post Office with their parents knew they would leave with a piece of candy from Leslie Whiting, the man behind the counter.

“I tell people all the time, my best friends are all under 5 feet,” Whiting said. “Some of them will make you cry, the sweetness of them.” 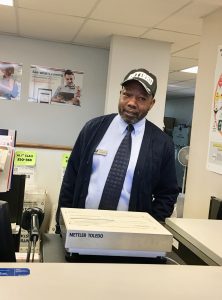 Leslie Whiting stands behind the counter at the Columbiana Post Office, where he worked for 25 years before retiring last month. (Contributed)

But someone else at the post office will have to start handing out the candy. After 25 years of service, Whiting has retired from the place where his kindness to everyone who walked through the doors—and to his coworkers—was his trademark.

“He’s been my buddy,” clerk Renee Ray said. “I can see how he interacts with customers. The kids all love him because he gives them suckers.”

A retirement celebration in Whiting’s honor was held on March 28 at the post office.

“Everybody was in tears,” postmaster Lea Faulkner said. “We miss him.”

A Pensacola, Florida native, Whiting started his work with the postal service in 1987, after he had been medically discharged from the Army.

He worked as a city carrier in Birmingham for seven years and moved to Columbiana in 1994 with his wife, Teresa, a Shelby native.

They pastor a church they started several years ago, The Church at Columbiana, and Leslie serves on the Columbiana City Council.

He served as chaplain at the Shelby County Jail for more than 20 years.

“I’ve enjoyed all these years,” he said. “I will miss the people I work with and the people that came into the post office.”

Clerk Bethaney Roland said Whiting is inspiring and encouraging to everyone he meets.

“He’s helped a lot of people in their time of need,” she said. “He is definitely highly respected. He’s a man of strong faith, too.”

As the first person most people saw when they walked in, he made friendliness a priority.

“I just want the people of this community to know I love them, and that’s what I try to display,” he said. “I’ve met a lot of good people.”

He said his family has supported him and his faith has guided him throughout his career.

“I most of all thank God,” he said. “God has always had a plan for me. I love my job. It’s truly been good to live in this community.”