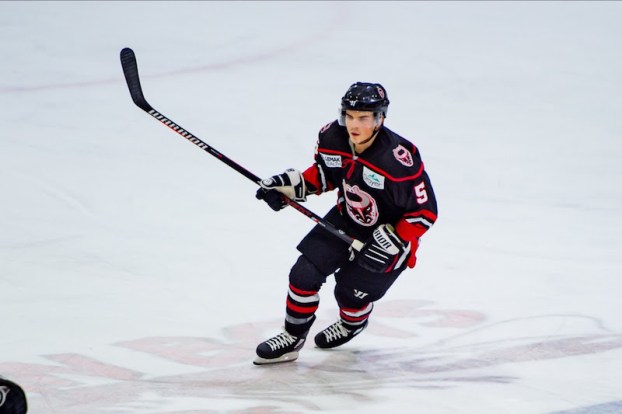 Birmingham Bulls rookie Cole Golka, above, notched the game-winner in a win-or-go-home game against Fayetteville to force a decisive game three on Sunday night at 7 p.m. on home ice. (Contributed)

PELHAM – After being shocked on the road in their first playoff game as a franchise in an ugly 4-0 shutout at Fayetteville on Friday, April 12, the Birmingham Bulls returned home to the Pelham Civic Complex a night later with their season on the line.

Having gone a perfect 4-0 against the last-seeded Marksmen in the regular season, the Bulls weren’t pleased with their night-one performance to kick off the playoffs, but made a point to come out with a different effort on Saturday.

In a game filled with power plays, 12 combined to be exact, two power play goals from the Bulls were key, but it was the second of the two from Cole Golka midway through the final period that made a difference in Birmingham’s season.

With 9:57 remaining, he buried a shot in the back of the net to give the Bulls a 3-2 advantage, which they held on to thanks to a consistent defensive effort.

While the Bulls gave up two goals, they allowed less than 10 shots in every period of the game not allowing Fayetteville to get many clean looks on the night.

It hasn’t been the start to the playoffs that goalkeeper Mavric Parks would have liked after giving up all four goals in the game-one loss and then two on 11 shots through the first two periods, but the league-leading keeper answered in a big way in the third period by shutting down all eight of the Marksmen’s shots.

Those eight shots were the most Fayetteville took in any of the three periods, as Bulls fans hope that symbolizes a strong-minded Parks heading into a decisive game three on Sunday, April 14.

Birmingham started the game on a strong note thanks to striking first with 4:25 left in the opening period.

Following strong defense during an aggressive start to the game, the Bulls were able to strike on a power-play goal from Josh Harris off assists from Golka and Geoff Crisfield to go up 1-0.

The Marksmen, however, went on the power play shortly after with 1:45 left in the period.

It looked as if Birmingham was going to escape the period without giving up a goal and would enter the second period trying to kill off the final seconds of the power play, but that changed when Sam Wilbur took an open shot and tied the game at 1-1 with a mere one second left in the period.

The Marksmen carried that momentum into the second period and 4:45 in scored their second goal in a row when Brian Bowen put his team on top 2-1.

It took a while, but Birmingham found the net again in the period with 6:01 left in the second behind a full-strength goal from Taylor Dickin off assists from Craig Simchuk and Caleb Apperson.

From that point forward, fans and the players themselves were on edge. The players knew what the final 25 minutes of the game meant, and so did the fans.

In a win-or-go-home situation, Birmingham’s intensity hit playoff mode, and the nerves of a team in its first playoff series in franchise history wore off.

The Bulls, who totaled 48 shots on the night, put 12 attempts on goal in the final period, and just one of those 12 attempts made the difference in their season when Golka found the game-winner.

The series will now go to its third game in as many days, as the Bulls will look to protect home ice and advance to the semifinals of the playoffs with a win.