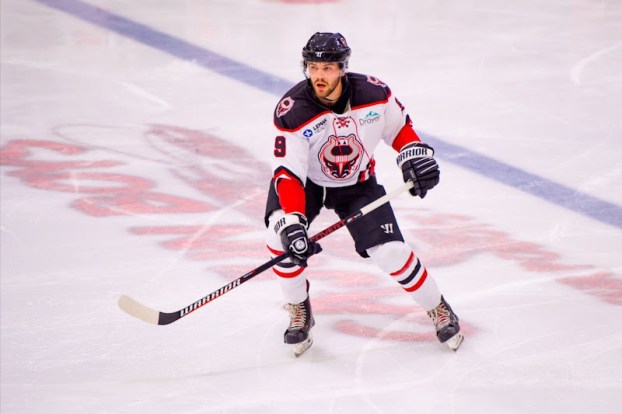 The Birmingham Bulls are headed to the semifinals of the SPHL President's Cup playoffs after winning two straight over Fayetteville on home ice. (Contributed)

PELHAM – No one knew what to expect on Wednesday, April 26, 2017, when it was announced the Birmingham Bulls would attempt a comeback after a 17-year absence by joining the SPHL, but one thing was clear—the vision.

After a winding year of working out the kinks during the 2017-18 season, the Bulls went on to close out their inaugural season with their first glimpse of what could become something special for an ice hockey team deep in the heart of a southern football state.

Now a year later, with their backs against the walls, the Bulls have turned that vision into a reality by overcoming a 1-0 series deficit to the Fayetteville Marksmen by sweeping two games in a row on home ice to earn a spot in the semifinals of the SPHL playoffs.

After dropping game one of the series on Friday, April 12, Birmingham took the trip back home and won 3-2 on Saturday, followed by a third win on Sunday by a final score of 5-0.

Dropping game one of the series put the Bulls in an uphill battle despite coming back home for two games due to those two games being played in consecutive days following a loss and having to travel 524 miles back home.

Birmingham, however, never panicked and got better as the series went on thanks to an incredible home-ice atmosphere to lift the team’s spirits.

As the nerves wore off during a 4-0 loss to the eighth best team in the playoffs during the opening game of the series, the next two games at home became about what the Bulls had done all season, and that’s use strong goaltending and efficient shooting to pick up wins.

During the regular season, the Bulls swept the Marksmen 4-0 without batting an eye, which brought some shock after such a lopsided performance in game one, but that was followed by a team that looked as if it knew it was still at an advantage.

During game two, Birmingham limited Fayetteville to just 19 shot attempts and goalkeeper Mavric Parks started to look like his normal self in the third period with a dominant effort, as the Bulls picked up a thrilling 3-2 win on a power-play goal from Cole Golka midway through the third period.

A night later, and the story was not only the efficiency offensively, but an unreal mark from league-leading Parks.

As the top keeper in the league during the regular season, his six combined goals given up through the first five periods of the series were more than unexpected, but you could see him almost shift into a different intensity between the second and third period of game.

That intensity fused with sharp concentration in goal in a win-or-go-home game for the second night in a row allowed Parks to divert 40 shots in a shutout effort.

His shift in energy was also matched by the offense, who took advantage of a 50-percent power-play conversion on the night to post two of their five goals in the 5-0 victory.

After a scoreless first period that saw Birmingham get outshot 18-6, the Bulls knew that differential throughout three periods wouldn’t end well and became much more aggressive in the second.

Birmingham ended up going from being more than doubled up in the shot column in the first period to doing the same to Fayetteville in the second by outshooting the Marksmen 19-8.

That aggressiveness led to the Bulls drawing several penalties to earn three power play opportunities in the period, as well as the end of a power play from the opening period.

With five seconds left on that carry-over power play, Garrett Schmitz and Shane Topf strung together nice passes that eventually ended with the puck on the end of Geoff Crisfield’s stick.

Crisfield made the opportunity count when he buried a shot to put the Bulls on top 1-0 1:38 into the second period.

As soon as that power-play goal was complete, it took less than two minutes for the Bulls to go back on the power play after a roughing penalty on Fayetteville’s Travis Jeke.

It took less than a minute for Birmingham to add to its lead when Craig Simchuk added a second power-play goal off assists from Matt Fuller and Topf to put the Bulls up 2-0.

That was followed six minutes later by another goal when Crisfield found the back of the net for the second time off assists from Jacob Barber and Golka, the hero from game two.

With Parks playing lights out in goal, that was more than enough, but Taylor Dickin added a fourth goal midway through the third period off a nice play between he and Simchuk, while Topf closed the game out with an empty-net goal with 1:24 to play.

Birmingham did have to kill off five power plays in the final period and were outshot 14-4, but the efficiency and goaltending were too much for the Marksmen to overcome.

Topf posted three points in the series-clinching win thanks to one goal and two assists, while Crisfield posted two points with two goals on four shots.

With the quarterfinals now in the rearview, it’s time for the Bulls to shift their focus to the Roanoke Rail Yard Dawgs in the semifinals with the series starting on Thursday in Roanoke before returning to Birmingham over the next two days.

Roanoke unbelievably knocked off No. 1 seed Peoria in the challenge behind two 4-3 victories, and will now get a crack at the second seeded Bulls to earn a spot in the SPHL President’s Cup Finals.

The two teams played seven times this season, including the final two games of the regular season, with the Bulls holding a 4-3 advantage in those matchups.

Every matchup between the two teams was decided by two goals or less with four of those seven games decided by one goal or less.

Birmingham has two players in the top 10 of total points this season behind Josh Harris and Jacob Barber, while having three inside the top 20.

Roanoke has three in the top 20 in Colin Murray, Jordan Carvalho and Steve Mele, but none in the top 10.

Both teams are very balanced in their scoring efforts, which is why the games have been so close, but the Bulls will have a goalie advantage.

By ALEC ETHEREDGE | Sports Editor PELHAM – After being shocked on the road in their first playoff game as... read more