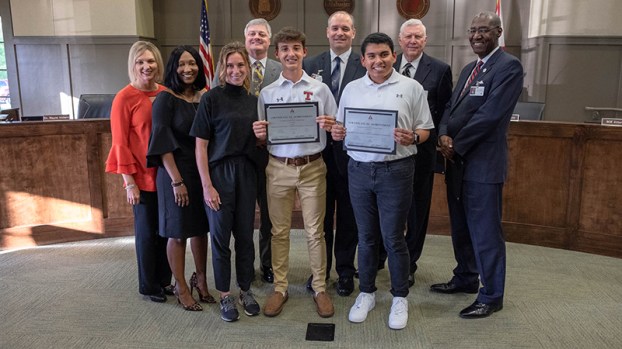 Members of the 2018 Thompson High School boys’ tennis team were honored by the Alabaster Board of Education during an early April meeting for winning the school’s first-ever county tennis championship. (Reporter Photo/Neal Wagner)

ALABASTER – Members of the 2018 Thompson High School boys’ tennis team made history during their most recent campaign, taking down many local challengers to be crowned Shelby County Champions.

Alabaster School Superintendent Dr. Wayne Vickers and members of the Alabaster Board of Education praised the members of the team during an April 8 meeting for being the first THS tennis team to achieve the honor, and presented each team member with a certificate in their honor.

The team was coached by Brad Easley, and the following team members were honored by the BOE during the April 8 meeting: