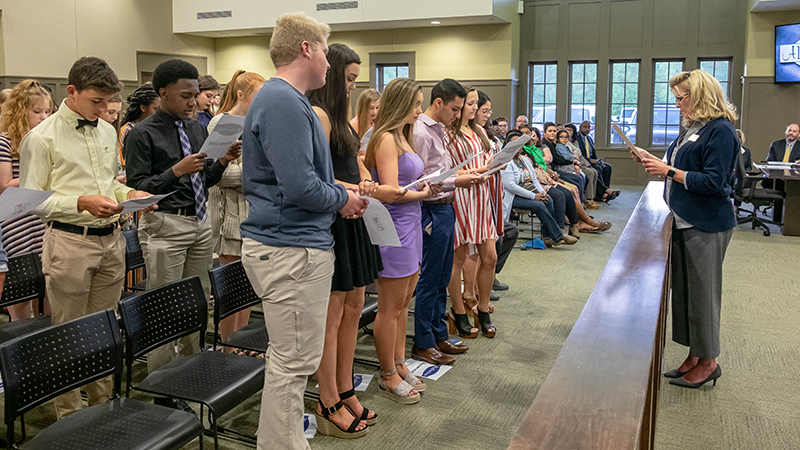 ALABASTER – The City Council chamber at Alabaster’s City Hall was filled to the brim with people during a standing-room-only meeting on April 15, but the demographics of the crowd was a bit younger than normal.

About half of the room’s seating gallery was filled with high school students who were either appointed or reappointed to the city’s Teen Council, as 54 local students took their oaths of office for the upcoming yearlong Teen Council term.

This year’s Teen Council is significantly larger than last year’s group of 31 students, and features many new members.

“This is the largest group we’ve ever had, and we had a lot of first-time applicants this time,” said Alabaster Mayor Marty Handlon. “We’re excited, and we think this will be a banner year. We are looking forward to it.”

During their time serving on the council, the teens will complete a team building day at Family Connection before holding regular meetings with Mayor Marty Handlon and will be involved in organizing teen-focused events such as movie nights and a water slide day this summer.

The purpose of the Teen Council is to “create an informed group of students who are familiar with municipal issues, to develop long-lasting relationships between students and city leaders, to sustain youth presence in a broad range of impact and decision-making areas across the community, to develop future civic leaders and to organize events for community teens.”

City Council President Scott Brakefield encouraged the teens to cherish the opportunity to get involved in their community.

“As with anything else, you’ll get out of it what you put into it,” Brakefield said. “You’ll get a chance to work together as a team, and you’ll have a chance to give back to your community.”

The following members were appointed to the Teen Council on April 15: