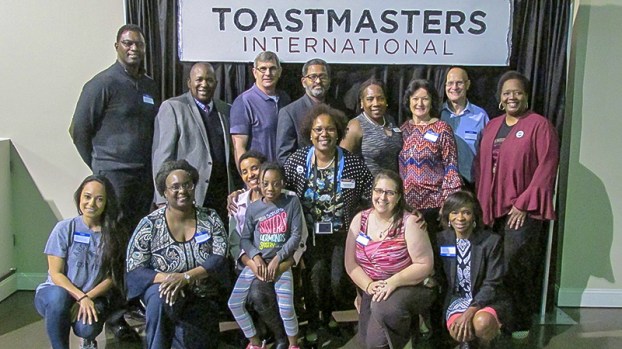 ALABASTER – The “Circle of Champions” Toastmasters Club in Alabaster celebrated its beginning in 2009 with an open house at the Abundant Life Church on April 15.

Club founder Wanda Spillers said the club organized at the local library but found their present home when a Toastmaster who was a member of Abundant Life Church volunteered to ask her church to sponsor.

“We’ve been here ever since,” Spillers said. “We’ve had over 100 members through the years. We care about each other and we’re family, so it’s more than learning how to communicate better in front of groups, though this is an important goal.”

Stan Spillers said after his wife’s founding, he joined as the first member

“We attended the club in Vestavia, but my wife dreamed of a local group since we live  in Pelham,” Stan Spillers said.

Spillers said both he and his wife served in the U.S. Air Force on various bases before moving to Alabama.

“I was a commanding officer and I spoke to service members all the time,” he said. “But the club has helped me grow in confidence and in organizational skills. I’ve also learned to get to the point and be brief!”

Spillers said he always feels a bit of nervousness before speaking, since studies show public speaking to be among the top fears, but learning to master his subject has helped him to be more confident in presentations.

“A little bit of nervousness can be good,” he said. “It can motivate you to be prepared!”

Toastmasters was founded in 1905 in Bloomington, Ill. when Ralph Smedley began to think of a way to help men develop organizational skills and to conduct public meetings. Coming from an YMCA background, Smedley envisioned this training only for men. The group admitted women for the first time in 1973 and elected its first international female president in 1985. The organization is now active in 143 nations.

Spillers said Toastmasters International has more than 400,000 members in its 16,000 clubs.

Crystal Neville, founder of “Speak Life Empowerment Nation” and a former member of the Alabaster club, served as keynote speaker at the open house. She explained that her non-profit organization seeks to help women deal with the everyday stresses of life.

Neville, also a minister, said her organization has social meetings and she conducts lectures on Facebook and through her website, speaklifenation.org.

According to the Speak Life Empowerment Nation website, a majority of medical visits are stress-related, and the organization’s goal is “to celebrate, rejuvenate, and inspire women to effectively counter stress through laughter, building healthy relationships with other women and encouragement.”

“What we do in our organization is what we all need to do,” she said. “The three key words are ‘confidence,’ ‘gain’ and ‘voice.’ This club helped me with this before we moved to the Bessemer/Helena area to found our group. I share what I learned and tell our ladies to ‘be who you are unapologetically.’”

Neville said some think the task of Toastmasters is only to keep track of “filler words” such as “uh,” “um” and “ah.”

“These words aren’t necessary, of course, though we do use them in everyday conversation,” she said. “We must learn how distracting these are in public speech. Filler words don’t discriminate! But growing in confidence is much more than using filler words that take away from our presentations.”

By NEAL WAGNER / Managing Editor ALABASTER – The City Council chamber at Alabaster’s City Hall was filled to the... read more