The Shelby County High School marching band, known as the Pride of Shelby County, will be proud indeed during the marching season next year.

After a full year of dedication and hard work, they managed to raise the funds to purchase brand new uniforms.

This hard-earned purchase replaced uniforms that were as old as the seniors graduating from the high school this year. 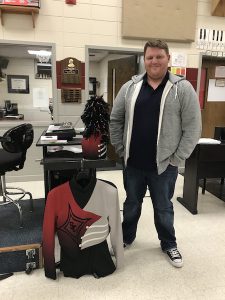 Matthew Martindale, SCHS band director, took on the challenge when he came onto the scene just in time for band camp last summer.

“The average lifespan of a band uniform is seven to 10 years,” Martindale said. “The band members had been dealing with broken pants, buttons and hats for each game.”
“Martindad,” as his students have begun call him, said now that they have accomplished this goal, the kids are all excited for it.

“They see it as an outward display of the program growing and evolving,” he said.
Under his leadership, the band will also be taking a band trip to Gatlinburg for the first time in many years this spring.

This is yet another goal that the band worked together to accomplish this year.

“I want to take the band to places it has never been before both physically and musically,” Martindale said.

Martindale wants the community to know its participation in this program matters.

The Pride of Shelby County is responsible for raising every penny of its own funding through fees, donations and grants.

The parents of these students worked together through concessions during games to raise $16,000 of the needed funds during the last football season.

“Remember, when you head to a game this next fall, each time you buy a Coke and a hot dog, you are providing an educational experience for students that attend SCHS and CMS,” Martindale said. “We want you to watch us at halftime, but as soon as that is over, we want you to fill our concessions lines up and help support these amazing students.”

Going forward, Martindale has plans to replace, update and expand the instruments that are available to students.

“Musically, I am pushing the students harder than any group I have taught,” he said. “I believe they are a special group that can do more and more.”

He wants to not only grow their marching experience, but also their concert band experience.

“I believe the concert band is the foundation of all playing,” he said.

This next year, there are already plans in the works to begin raising the funds needed to make Martindale’s goals a reality.

Aug. 1 is the deadline to have your business sponsorship displayed for the coming football season.

Sponsorship forms can be obtained from the front office of the high school or from Martindale at mmartindale@shelbyed.org.

If you are an alum, you may also be interested to know that the old uniforms are being sold for $75 each. These can be purchased by getting in contact with the band or a current member.

By SASHA JOHNS / Community Columnist “You need blood for your daughter, but there is none available.” These were the... read more