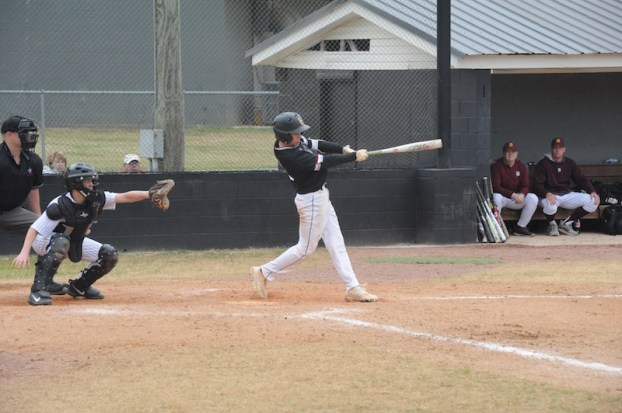 MONTEVALLO – While the Shelby County Wildcats narrowly missed out on a spot in the playoffs this season, it doesn’t take away from what head coach Cory Hamrick and this year’s squad were able to accomplish in his first year, and on Monday, April 16, the Wildcats put it all together one last time for a 4-3 victory over county rival Montevallo to finish the season 21-10-1.

With the Bulldogs heading to the postseason, it was Shelby County who came out wanting to win the game badly to end the season on a high note heading into next year.

And with a 3-0 start in the top of the first inning, that’s exactly what the Wildcats got.

They quickly loaded the bases behind back-to-back singles from Greg Oliver and Wyatt Miskelly, as well as J.P. Fox being hit by a pitch.

The first run of the game was scored when Austin Harris grounded into a fielder’s choice to drive Oliver home. Following another walk and a fly out, there were two down in the inning with the bases loaded.

That’s when Chase Matherson singled on a hard ground ball that got through the left side of the infield to drive in two more runs for a 3-0 lead.

It was a lead Shelby County didn’t relinquish the entire night, but it was tested on two different occasions.

After a quiet second inning and top half of the third, Montevallo stepped to the plate looking for its first successful stint on offense.

The Bulldogs got a leadoff single from Kadarius Underwood and a double from Josh Mims to put runners on second and third with no outs.

While they were unable to pick up another hit in the inning, a sac fly and fielder’s choice allowed two runs to cross the plate for the Bulldogs to cut Shelby County’s lead to 3-2 heading to the fourth inning.

In the top of the fourth, however, the Wildcats answered back quickly.

It looked like they would score on a double from Miskelly, but instead Connor Aderholt was pegged out at the plate after trying to score all the way from first base.

Miskelly, however, scored shortly after when Fox singled on a grounder up the middle to put Shelby County on top 4-2.

That advantage held up and wasn’t threatened for a while, but in the bottom of the seventh, Montevallo gave one more good run at the comeback and came close to pulling it off.

After a pop out started the inning, the Bulldogs laced three consecutive singles from Mims, Malike Inabinette and Campbell Cost, the last of which drove in Mims who beat out a throw to cut the deficit to one run.

Following a walk, the bases were loaded with one out in the inning, and it looked as if the Bulldogs had a great chance to tie the game.

That’s when Miskelly stepped up to strike out the next batter and force a ground out to third for the final out, which narrowly kept the Bulldogs from spoiling Shelby County’s season finale.

At the plate, Matherson went 2-for-3 with two RBIs to lead the Wildcats, while Aderholt was 2-for-3 as well. Miskelly led the team in hits going 3-for-4, while Harris added one RBI.

Montevallo was led by Mims, who went 2-for-4 at the plate with two runs scored. Grant Cordes went 1-for-2, while Inabinette had an RBI after going 1-for-3. Blaine Carstensen also added an RBI going 1-for-1 in the game.