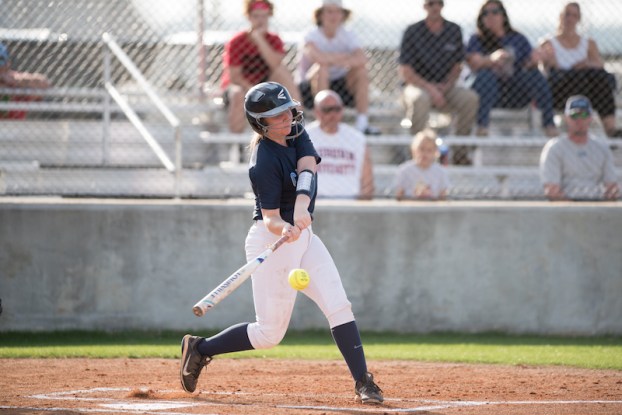 Calera pulled off a big win against Pelham on Tuesday, April 16, behind a late comeback in the final three innings. (Reporter photo/Keith McCoy)

CALERA – It hasn’t been the season Calera’s softball team hoped for, but on Tuesday, April 16, the Eagles had a reason to celebrate after scoring five unanswered runs between the fifth and sixth innings to pull off a 7-6 upset of the Pelham Panthers.

Calera trailed 6-2 heading to the bottom of the fifth after giving up three runs in the top half of the inning, but the Eagles didn’t roll over.

Instead, they put together their best inning of the night.

It started with back-to-back singles from Kayla Butler and Emma Harrison to put two aboard before an out was recorded.

Meaghan Marfice, however, stepped to the plate two batters later and drove a hard ground ball up the middle that allowed her to leg out a double, while both Butler and Harrison crossed the plate to cut Pelham’s lead to 6-4.

Following a second out, Jacey Thornton walked to put runners at first and second, before Katie Mitchell stepped to the plate and singled in Marfice for the Eagles’ third run of the game to cut the deficit to one heading to the sixth inning.

In the top of the sixth, Calera got exactly what it needed defensively behind a 1-2-3 inning for the first time in the game.

Still needing a run with two at bats left, the Eagles were running out of time at the plate, however,

In the bottom of the sixth, their battle looked a little steeper after two consecutive strikeouts started the inning.

But then a big answer came. Harrison walked to put a base runner aboard. She then stole second to move into scoring position with Brianna Plocharczyk at the plate.

After battling in a tough at bat featuring seven pitches, Plocharczyk eventually found her pitch in a full count and hit an RBI single to left field that tied the game 6-6 in a clutch moment.

That wasn’t all either. Following a walk to Marfice, Payton McDonald gave the Eagles the lead with an RBI single to center field driving in courtesy runner Lovely Bailey, which put Calera on top 7-6.

That eventually became the game-winning run, as Calera allowed just one base runner in the top of the seventh before Plocharczyk struck out the final batter to pull off the comeback victory.

Through the first 5 1/2 innings of the game, Pelham was able to take its 6-2 lead behind two runs in the first, one in the third and three in the top of the fifth, while Calera had put up just two in the third.

The Eagles, however, got their big answer in the bottom of the fifth, which gave them the confidence to finish off the game in the final two innings.

Marfice led Calera at the plate with a 2-for-3 game featuring three RBIs and one run scored. Plocharczyk added a 2-for-4 game with two RBIs. McDonald and Mitchell each picked up a hit and one RBI. Harrison added two hits.

Plocharczyk got the complete-game win allowing eight hits and six runs while striking out four.

Briana Copeland had a strong effort in the circle for the Panthers pitching all six innings and striking out 13 batters. She allowed nine hits and seven runs.