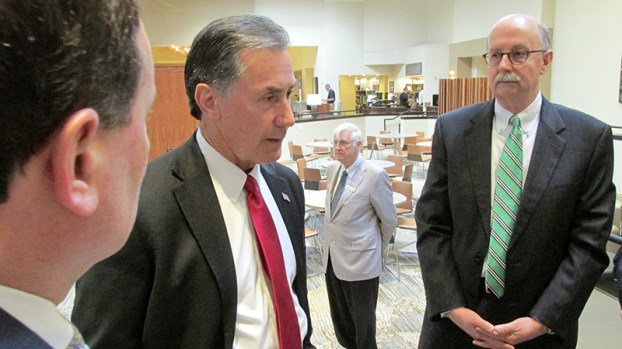 Congressman Gary Palmer, left, speaks with locals during an “Eggs and Issues” breakfast sponsored by The Shelby County Chamber on April 16. (Contributed)

HOOVER – Alabama 6th District Congressman Gary Palmer was guest at the “Eggs and Issues” breakfast at the Birmingham Marriott on April 16. The event was sponsored by Alabama AARP and hosted by The Shelby County Chamber and co-hosted by chambers of commerce in Hoover, Montevallo, Mountain Brook and Vestavia.

Palmer, in his third term in the U.S. House, noted the tragedy in Paris the day before.

“The Notre Dame Cathedral is a symbol of the city just as much as the Eiffel Tower, and it’s irreplaceable,” he said. “And our nation needs to know that some things we treasure are irreplaceable. I regret we have a toxic atmosphere in Congress. We’re divided. We need a sense of community in government and in our country.”

Palmer said he was concerned about the deficit, currently more than $21 trillion.

“This debt will impact not just our district, but our nation,” he said.

Palmer said he favored a consumption tax rather than an income tax since all consumers would participate, even undocumented residents who make purchases.

“We fail to collect about $400 billion each year that’s owed in taxes, and we make $150 billion in improper payments,” he said. “This money would go a long way to helping pay down our debt.”

Palmer noted he would be in Eastern Europe soon and would like to help facilitate selling American energy to this region.

“We’re the top energy-producing nation in the world,” he said. “We can increase our GDP by selling petroleum and natural gas, and also help bring these nations away from Russian influence.”

Palmer said he wasn’t a proponent of the recently passed gasoline tax in Alabama, since more fuel-efficient cars and hybrids will bring diminishing returns from the tax.

“Some have talked about a ‘vehicle miles’ or usage tax, and I believe this might be better,” he said. “But we need to think of what we need in infrastructure 25 years from now and stop thinking about what we need next month.”

In response to a question about prison reform, Palmer said he favored a plan to incentivize education in prison and believed this was among the best ways to facilitate transition for those eligible for release.

“Our online education program in Alabama is superior,” he said. “We could offer real high school diplomas, not just the GED, to our non-violent inmates as a condition of parole, and the same kind of thing to those with degrees who graduate from craft or vocational training. We don’t need to be soft on crime, but we need to be smart on crime.”

Responding to a question about immigration, Palmer noted, “The issue is that we don’t know who the people are who come into our county. All it took for 9/11 was 19 terrorists. Plus, an onslaught of drugs is coming across our border. I agree we have a crisis, as former Obama Homeland Security Secretary Jeh Johnson has admitted.”

In a response to a question about the Mueller Report scheduled for release this week, Palmer said this wouldn’t mark the end of the investigation.

“The Senate and the House had investigative committees who found no collusion, and the Mueller Report found no collusion after spending nearly $25 million and employing scores of investigators. Mueller’s credibility is on the line. There is no collusion. But Inspector Gen. [Michael] Horowitz will report probably this summer and reveal a dark chapter in abuses by the FBI and the Department of Justice.”

Palmer said the expected Mueller Report is redacted “for a reason,” since grand jury protections are in place.

“I as a member of Congress can read the full report, but I cannot discuss it,” he said.

“Though I respect [former Att. Gen.] Jeff Sessions, I believe [Att. Gen.] William Barr is the right man for the right time. I believe he will restore a sense of justice.”

Palmer said he believed difficulties can be beneficial if they bring us together.

“When I grew up, newspapers were a community event,” he said. “We read about people in our community and what they think. Now we get news from our computer, and opinion pieces are often anonymous. I want to do everything I can to promote community and I want to leave the 6th District in even better shape when I’m done.”

PELHAM – The Pelham City Council appointed Robert “Bob” O’Neil to Place 1 on the Pelham Board of Education at... read more