Playoff preview: A look at the first round of the AHSAA and AISA baseball playoffs 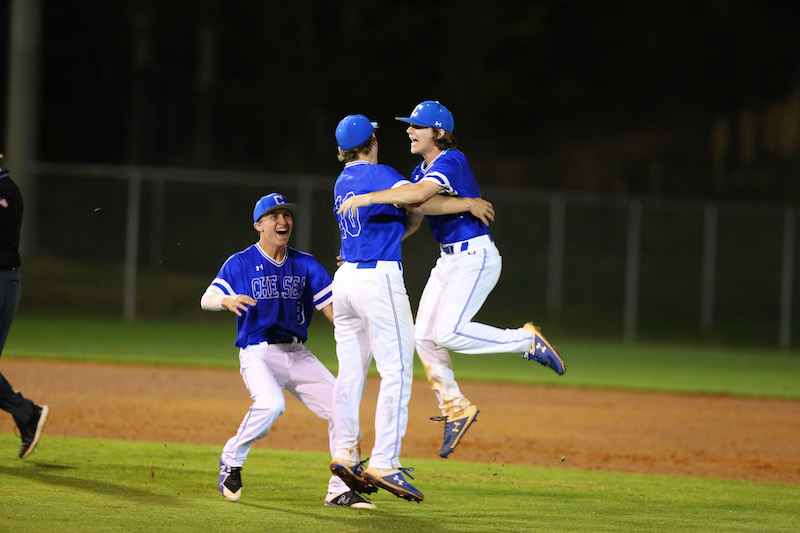 Chelsea is one of six AHSAA teams from the county to make the 2019 postseason and will look for a deep run after winning the Class 6A Area 8 title over Helena. (For the Reporter/Cari Dean)

It’s hard to believe that it’s that time of the year again, but with the regular season coming to an end, the 2019 edition of the AHSAA and AISA baseball playoffs are upon us; and this year, Shelby County has six AHSAA teams and three AISA teams looking for a state championship.

It’s a new season, as the slate is wiped clean and the past is the past. Every team will start its new beginning with one goal in mind—their season not ending without lifting a state championship trophy. But you can’t do that unless you make it out of the first round, and below we have a preview of the first round tests for each team, which begin this Friday for all but two teams.

With Class 7A being the only classification that starts the playoffs on April 26, this series won’t begin for another week, but we can go ahead and get excited about this top-six showdown featuring No. 2 Oak Mountain and No. 6 Hewitt-Trussville.

The Eagles advanced via finishing second in Class 7A Area 5, while the Huskies advanced out of Area 6 as the champions. The two didn’t meet in the regular season, but were on a collision course with how well they played. With a combined record of 56-13, the winner of this series will have a great chance to win a state championship.

The biggest key in this matchup is the opener. Oak Mountain has to take advantage of Jackson Kimbrell on the mound in game one. As one of the state’s best pitchers, you can’t waste that opportunity. If they can do that, then they’ll have a solid chance, but fall to an 0-1 hole, and it will be tough against a really good Hewitt team.

Chelsea vs. Northridge (Doubleheader Friday at 4:30 p.m., if necessary Saturday at 1 p.m.)

After shocking Class 6A Area 8, specifically uprooting the normal state championship contending Helena from atop the area, the Chelsea Hornets will now enter the first round of the playoffs as area champs.

If the offense can continue to score runs like it has in the last eight games, they’ll be fine with the balanced pitching effort they get, but both teams have played difficult schedules and should be ready for this moment.

Helena at Hillcrest-Tuscaloosa (Doubleheader Friday at 4:30 p.m., if necessary Saturday at 1 p.m.)

This is possibly the toughest matchup for any of our county teams, but if there’s a team that can pull of an upset, it’s the Helena Huskies, who are always ready for the postseason.

There is no hiding that this has been a down year for the Huskies, but they’ve been to two consecutive state championship series winning the title two years ago. While No. 2 Hillcrest-Tuscaloosa represents a tall task sitting at 24-4 this year, Helena has started to play better late in the season and isn’t scared of this moment.

Hillcrest has to be the favorite from what they’ve done all season, but nobody would be surprised if Helena pulled the upset. If Helena does want to win, the pitching staff will have to up its game.

Briarwood vs. Munford (Doubleheader Friday at 4 p.m., if necessary Saturday at 2 p.m.)

It’s been repeated on several occasions, but this Briarwood team started the season 0-12 before reeling off 10 consecutive wins with its only blemish the rest of the way coming in the Lions’ regular-season finale against 7A No. 2 Oak Mountain.

Now 10-13 overall, the Lions get a matchup with Munford who is 16-18 overall this season. Briarwood has definitely played a more difficult schedule, with almost every one of its games outside of area play coming against teams in higher classifications.

The biggest plus for the Lions is the six-plus runs they have scored in nine of their last 11 games. If the offense is clicking like that, it will be enough to at least get them through this round. It also helps that Munford is 4-9 in its last 13 games.

Montevallo at American Christian (Doubleheader Friday at 5 p.m., if necessary Saturday at 1 p.m.)

The good news, Montevallo is back in the playoffs in its first year back in Class 4A. The bad news, the Bulldogs have to square off against No. 8 American Christian.

While both teams have spent time in the top 10 of the 4A poll this season and have similar records with Montevallo at 18-11 and the Patriots 19-11, it’s a tough first-round matchup for the Bulldogs.

After a 10-11 start to the season, American Christian has now won nine consecutive games against good teams to close out the regular season. Montevallo has been a bit more consistent going 4-7 in their last 11 games, but the positive is that the Bulldogs already experienced a taste of the playoffs by sweeping Leeds to earn a spot in the postseason.

During that sweep, Montevallo won both games by a run in the final inning. The Bulldogs did what it took to win, and that’s all you need this time of the year.

Vincent at Westbrook Christian (Doubleheader Friday at 4:30 p.m., if necessary Saturday at 1 p.m.)

The Vincent Yellow Jackets will also have a difficult task in the first round of the playoffs squaring off against Class 2A Westbrook Christian.

Both teams have had their share of struggle recently with Westbrook losing eight of its last 12 games and Vincent having lost nine of its last 11 games. Several of those losses for the Yellow Jackets, however, were to teams in higher classifications.

If Vincent wants to pull off the upset, the bats will have to come alive. In the Jackets’ 9-6 start to the season, they scored seven-plus runs in eight of their nine wins. Since, they’ve done that just one time and have failed to score more than four runs in all but one of their last nine games. Patience at the plate and seeing the ball will be key for a Vincent win.

Cornerstone vs. Southern (Second round)

The Cornerstone Chargers have had a great season on the diamond and earned the No. 1 seed in their area to pick up a bye in the first round of the playoffs.

With Southern Academy picking up a forfeit win in the first round, the Chargers’ second-round opponent has already been set. Southern is just 7-15 on the season, which gives Cornerstone a great chance to advance to the AISA Class A semifinals. The Chargers are the better team and just have to rely on what has gotten them to this point.

Coosa Valley vs. Emmanuel (Doubleheader Friday at 2 p.m., if necessary Saturday at 1 p.m.)

Coosa Valley was one of the hottest teams to start the 2019 baseball season, but as of late, the Rebels have struggled with nine losses in their last 11 games to fall to 16-17 on the season.

The good news for Coosa Valley is its first-round opponent in the Class AA playoffs. The Rebels will get three seed Emmanuel Christian who is 6-14-1 this season.

Coosa Valley has been a team that feasts on lesser opponents this season with almost all of the Rebels’ losses coming to teams inside the top 10 of the AISA standings. Their difficult schedule should have the Rebels ready for this moment with a win advancing them to the quarterfinals against Patrician.

Kingwood at Fort Dale (Doubleheader Friday at 4 p.m., if necessary Saturday at 1 p.m.)

At 12-16 overall this season, it hasn’t been a dominant year for the Kingwood Lions, but they’ll still have a chance to pick up a first-round win and it wouldn’t be surprising if it happened.

While Fort Dale is coming in as the two seed having won five consecutive games, the Lions have plenty of firepower to keep up with the 9-11 Eagles.

The Eagles did, however, beat Kingwood twice in the regular season by final scores of 13-1 and 6-0, making them a favorite to advance.