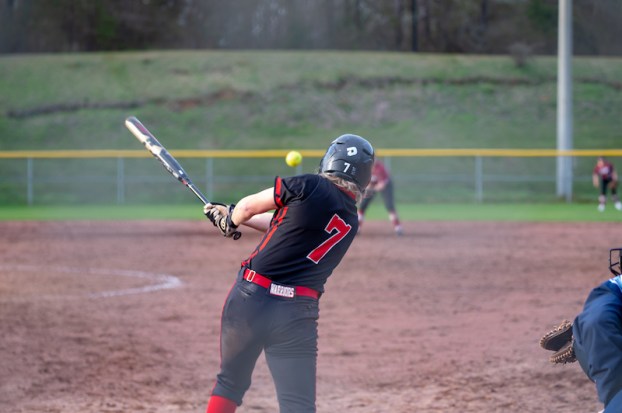 Grace Robertson, above, hit a walk-off home run against Oak Mountain in the bottom of the eighth that allowed Thompson to finish area play undefeated. (For the Reporter/Larry Dancy)

ALABASTER – It’s been a dominant season for the Thompson softball team, and after four consecutive wins by at least seven runs, the Warriors went into a matchup with the Oak Mountain Eagles on Tuesday, April 16, looking to close out area play with an undefeated record to set themselves as host of the upcoming area tournament.

In a game that saw the two opponents combine for 30 hits, it was one hit in bottom of the eighth inning that separated the two teams.

After coming back late to force extra innings thanks to a three-run sixth inning, Thompson was riding a ton of momentum having held the Eagles scoreless for four consecutive innings.

Then, following an inning where the Eagles put two runners on base but failed to score, Thompson decided it was time to end it.

Grace Robertson led the bottom of the eighth inning off at the plate, and with one crack of the bat ended it all. After fouling off the first pitch, she got her timing down and connected perfectly on the second pitch driving it deep to left field and over the wall for a walk-off home run.

With the win, Thompson moved to 29-3 overall this season and closed out area play 6-0 to earn hosting rights for the upcoming Class 7A Area 5 tournament where the top two teams will advance to regionals.

Early in the game, the Warriors struck first with two runs in the bottom of the first in the same way they ended it. Kindall DeRamus hit a leadoff home run to kick-start their night, but even more impressive, that was followed by a second homer in a row from Madison Plunkett to put Thompson on top 2-0.

Oak Mountain, however, got the next big hits in the game when the Eagles strung together three consecutive doubles from Dawn Autry, Grace Hummel and Abi Brown in the top of the third, followed by a two-run home run from M’Kiyah Mitchell. All of those extra base hits led to Oak Mountain storming in front 4-2.

THS answered back with an RBI single from Robertson in the bottom of the third to get within a run, but that deficit grew again when the Eagles put together their second four-run inning in a row in the top of the fourth.

The Eagles used three singles, an RBI groundout, an error and a walk to put together the damaging inning and take an 8-3 lead in the game.

From that point forward, it was an uphill battle for Thompson, but the Warriors started the hike in the bottom of the fourth.

Following singles from Abby Kellogg and DeRamus, Plunkett stepped to the plate with two outs in the inning and drove both home with a single to cut Oak Mountain’s lead to 8-5 through four innings.

That three-run deficit held up until the bottom of the sixth inning, it what became a crazy comeback for Thompson.

The inning started off extremely promising when DeRamus singled to left field before Plunkett stepped to the plate and blasted her second home run of the game over the wall in center field to cut the deficit to 8-7 with no outs.

In two of the next three at bats, Mikayla Touhey and Lauren Cabiness singled to put two more baserunners aboard with one out.

That, however, was followed by two straight pop outs in the next two at bats, but thanks to a wild pitch and an error during Ella Pate’s at bat, Touhey was able to cross the plate for the game-tying run.

Pate’s pop out then ended the inning, making that error the big difference in forcing extra innings where Thompson pulled off the walk-off victory.

Plunkett led the Warriors at the plate with a dominant 4-for-4 game featuring five RBIs and three runs scored. She also walked to reach base safely in all five of her at bats.

Robertson added a 3-for-5 game with the walk-off homer, including two RBIs. DeRamus went 3-for-5 with an RBI and three runs scored, while Cabiness also picked up three hits going 3-for-4.

By ALEC ETHEREDGE | Sports Editor TUSCALOOSA – It wasn’t the series the Thompson Warriors had hoped for, but with... read more