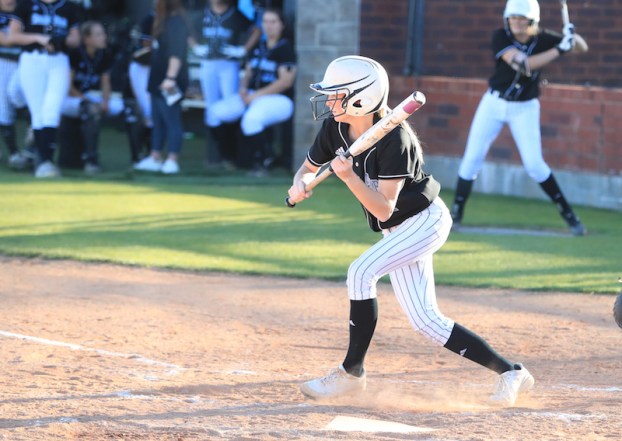 Spain Park's Taylor Harrington, above, went 3-for-3 with four RBIs to lead the Jags to a victory against Mountain Brook that locked up the regular-season area title. (For the Reporter/Dawn Harrison)

HOOVER – Following a victorious weekend at the Sumiton Christian tournament, the Spain Park Jaguars seem to be gaining some momentum again, and on Tuesday, April 16, the Jags closed out area play with a 15-3 victory over Mountain Brook to not only improve to 33-6 on the season, but officially earn the right to host the Class 7A Area 6 tournament where the top two teams will advance to regionals.

The game also marked a special night, as the game meant more than the on-field competition between the two area teams as they competed to “Strike out Alzheimer’s” wearing purple jerseys to bring awareness to those with Alzheimer’s and dementia.

From start to finish, Spain Park controlled its matchup with the Spartans scoring a run in every inning of the shortened five-inning victory, including an eight-run fourth inning to close it out.

While the Jags’ offense came to play putting up three runs in the first two innings, the Spartans also came looking for an upset and matched those three runs.

Mountain Brook used three consecutive singles and an RBI groundout to put the first two runs of the game on the board in the top of the first for an early 2-0 advantage.

Spain Park came right back in the bottom half with two runs of its own thanks to singles from Annabelle Widra and Maddie Majors, and an RBI triple from the speedy Taylor Harrington.

In the top of the second, the Spartans added three singles in a row for the second consecutive inning. This time they followed two strikeouts to start the inning, but eventually they were able to drive in one run with the third single to take the lead back at 3-2.

But thanks to a second triple in as many innings from Spain Park, the Jaguars answered in the bottom of the second. Widra had the triple this time around, while Harrington followed with an RBI single to tie the game.

That marked the final inning with a tie, or even close game.

After a strong inning defensively in the top of the third, Spain Park stepped to the plate and put four runs on the board in the bottom of the third.

A leadoff home run from Alexis Anderson was followed by a double from Bailey Bowers and an RBI single from Lydia Coleman. Two sacrifice flies the remainder of the inning led to the Jags taking an 7-3 lead at the end of the inning.

Then, an inning later, Spain Park put the game to rest by scoring eight runs behind four singles, two triples, a double, a walk, an error and a sac fly.

Up 15-3, the Jags closed out the 10-run rule victory in the top of the fifth with three consecutive strikeouts from Ella Reed.

Anderson, Bowers and Majors all picked up two hits with one RBI and a combined four runs scored. Lindsay Parker added three RBIs with a 1-for-3 game. The Jaguars totaled 17 hits and no errors in the win.

By ALEC ETHEREDGE | Sports Editor ALABASTER – It’s been a dominant season for the Thompson softball team, and after four... read more