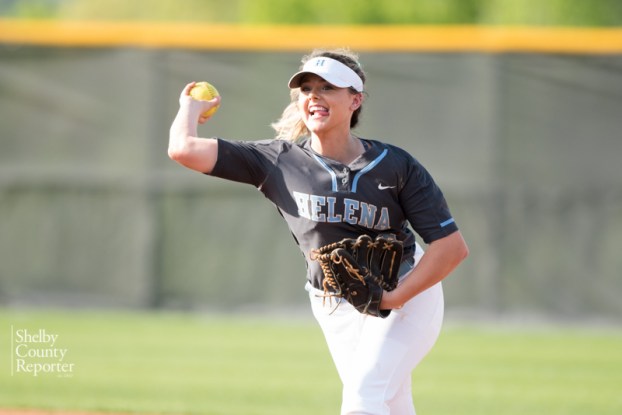 Helena's Torie White went 2-for-3 with four RBIs in the Huskies' 4-3 win over Chelsea on Tuesday, April 16. (Reporter Photo/Keith McCoy)

HELENA – As the games wind down in the regular season for softball, Helena continued its hot streak in area play by defeating Chelsea 4-3 on Tuesday, April 16, marking the fourth straight area win for the Huskies.

The win was big as it relates to Helena’s chances of possibly hosting the area tournament, should Chelsea fall to Pelham in the final regular season area game.

In the win against the Hornets, Helena was led once again by senior ace pitcher Avery Barnett and Torie White’s outstanding game offensively to pull off the win.

After both teams failed to score through the first two innings, Chelsea plated two runs in the top of the third inning on a two-RBI single.

Helena would take the lead in the bottom of the fourth inning thanks to a big swing by White with runners at first and second.

White came to the plate and hit a clutch three-run home run to left field to give the Huskies a 3-2 lead.

Chelsea would tie the game in the next half inning when Barnett gave up a bases loaded walk. Barnett allowed six walks in the game.

Tied 3-3, the deciding go-ahead run would come off the bat of White in the bottom of the fifth inning as she hit an RBI single to left field to score Peyton Wilkins as Helena regained the lead 4-3.

Chelsea threatened to tie the game in the top of the sixth inning but Helena threw a runner out at home and the final out in the inning came on a pop out.

Moving to the top of the seventh inning, Chelsea trailed 4-3 with three outs to work with but Barnett was able to sit the Hornets down in order on two ground outs and a strikeout to end the game.

In all, Barnett pitched a complete game on 88 pitches while striking out four to pick up the win.

At the plate, White finished 2-for-3 and accounted for all of the Huskies’ runs batted in with four.