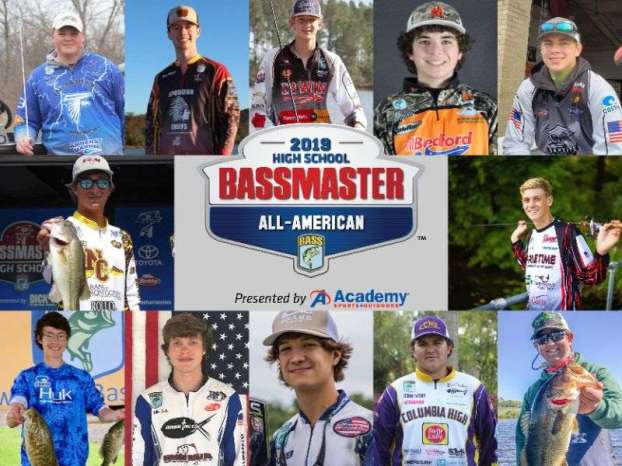 Briarwood's Tucker Smith was one of 12 high school students across the country named as a 2019 Bassmaster All-American. (Contributed)

BIRMINGHAM, Ala. — Twelve standout high school anglers have been selected as members of the exclusive Bassmaster High School All-American Fishing Team presented by Academy Sports + Outdoors, and one of those elite selected was Briarwood Christian School’s Tucker Smith.

“We are proud to welcome an exceptional group of anglers to our 2019 class of High School All-Americans,” said Bruce Akin, B.A.S.S. CEO. “Each year we see competitive applications from across the country, and everyone is so impressive. This class is made up of exceptional young fishermen who also excel in academics, conservation initiatives and community service.”

More than 400 applications nominating students in grades 10-12 were submitted from 35 states across the nation.

Of those, 62 were chosen as Bassmaster All-State anglers. After reviewing tournament resumes, community service activities and recommendations from coaches and school officials, a panel of judges representing the sportfishing industry, media and conservation groups further narrowed the field to the top 12 high school anglers in the country.

And Smith was named one of those 12.

A junior at Briarwood Christian School, Smith has two first-place finishes on his resume, including a win against a 200-boat field at the Bassmaster High School National Championship held on Kentucky Lake out of Paris, Tennessee.

“When Tucker was in junior high school, he suffered a traumatic ‘tib fib’ leg fracture at football practice,” said Jay Mathews, director of athletics and the bass fishing coach at Briarwood Christian School. “He was in a wheelchair for quite some time. Tucker decided to take this setback as a comeback and even fished from his wheelchair. He never complained throughout his recovery.”

Off the water, Smith has worked for King’s Home Kampfire for the King event and has been a big part of managing a private lake in Louisville for a number of years. This year, they will be adding a fish habitat in addition to the baitfish stocked in 2018.

Smith, and the rest of the 12 fishermen, has been invited to participate in a special Bassmaster High School All-American Bass Tournament being held in conjunction with the 2019 Toyota Bassmaster Texas Fest benefiting Texas Parks and Wildlife Department event.

It’s a fan-favorite festival that will be held May 2-6 on Lake Fork, Texas. Each All-American angler will be paired with an Elite Series pro for the one-day derby to be held on a nearby fishery.

By SETH HAGAN | For the Reporter ALABASTER – After a long, close win against Hoover the night before, the... read more