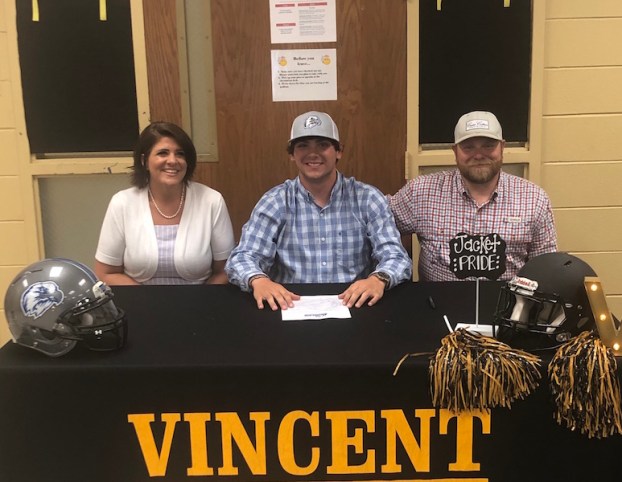 VINCENT – Your high school athletic career comes and goes in a flash, but if you’re one of the lucky few that gets to sign a scholarship to play at the next level, your career gets to continue on, and that’s what happened on Wednesday, April 17, at Vincent Middle High School.

Senior dual-sport athlete Robbie Albright got to experience the special moment in his life in front of family, friends and teachers, as he signed to continue playing the sport of football at Faulkner University in Montgomery.

Albright chose the path of football at the next level, but he’s been an impressive two-sport athlete that has also excelled in baseball for the Yellow Jackets—so much so that he was named the 2018 Co-Player of the Year in Shelby County.

As a junior then, Albright held a batting average of .500 and totaled 52 hits with 47 runs scored. A total of 22 of those 52 hits were extra-base hits thanks to 15 doubles and seven triples.

He shared the honor with former Helena pitcher Landon Green, who is currently an Alabama baseball player.

Albright also went on to represent in the North-South All-Star baseball game last summer where he scored thanks to drawing a walk, as he helped lead the North team to a 6-2 victory.

But football is the route the senior wants to go, and you have to imagine that a strong senior season on the gridiron had a lot to do with that.

As one of the best athletes across the county, he played linebacker for the Yellow Jackets during his senior season, while also spending some time in the backfield at running back/full back.

Defensively, however, he was a force to be reckoned with. With a strong nose for the football, he became one of Vincent’s best players during his senior season and totaled 135 total tackles with eight tackles for loss as well as one sack and one interception.

That mark led to him being a First Team All-County player on this year’s All-County team. He was one of five linebackers to make the team as all five posted at least 100 total tackles.

Now, having grown as a player, he’ll look to continue to develop at the next level when he joins the Faulkner football program next fall. With his athleticism, he’ll have a high ceiling to work with.

Playoff preview: A look at the first round of the AHSAA and AISA baseball playoffs

By ALEC ETHEREDGE | Sports Editor It’s hard to believe that it’s that time of the year again, but with... read more