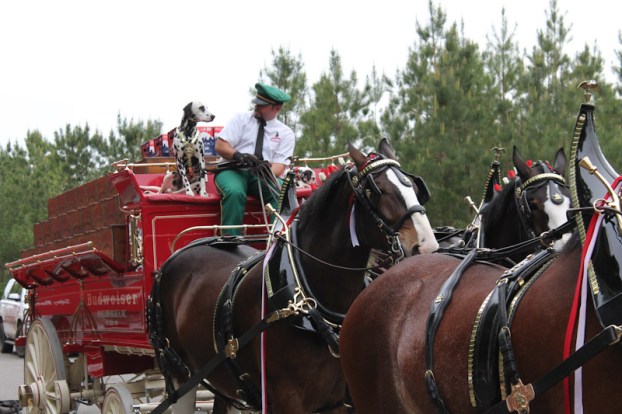 The Budweiser Clydesdale's being led by a representative and one of the Dalmatian guides.(Reporter Photos/ Nathan Howell)

Mt Laurel — Eight of the famous Budweiser Clydesdales marched through the streets of Mt Laurel on April 17 as part of the company’s promotional events.

Parents, children and equestrian enthusiasts alike flocked to the area to witness the horses, which are a sight to behold towering over most of the guests at an average of 6 feet tall and weighing more than 2,000 pounds.

The horses appear at events in teams known as “hitches,” and visit locations all over the country for photo opportunities, commercials and promotional events for the Anheuser-Busch brewing company.

“From their first appearance in 1933 to their enduring presence on the American landscape, the Clydesdales are more than the symbol of Budweiser beer; they are the living embodiment of America’s great industrial spirit,” according to the company’s website.

The events usually have the horses pulling a wagon full of beer that weight around 7,200 pounds, which is a reference to the beginnings of the company, when the horses were the primary mode of transportation.

Another interesting part of the spectacle were the two Dalmatians, one adult and one puppy, which were historically used as guides and protectors for the horses. However now the dogs appear at the events “to just look great,” according to a spokesperson.

The Clydesdales are making four more stops between April 18-20 in the Shelby County area before moving their tour on to Arizona.
More information about the Budweiser Clydesdales and related events can be found at Budweiser.com/en/clydesdales.

Outbreaks of measles across the United States this year have provoked passions on both sides of the debate about vaccinations... read more