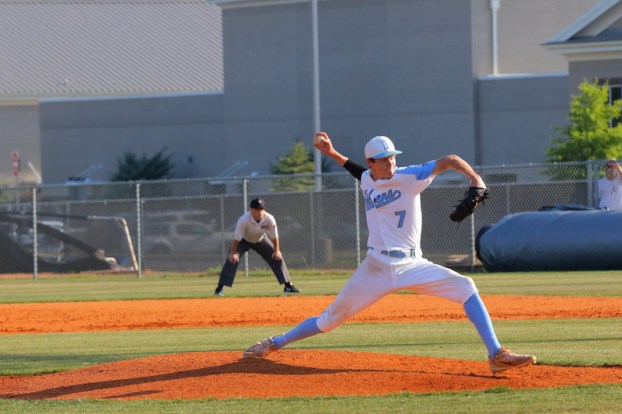 Former HHS pitcher Richard Fitts has had a strong freshman season, leading Auburn to a 7-4 win over Ole Miss on Thursday, April 18. (File)

AUBURN – After finishing an outstanding high school career that included a state championship, former Helena High School pitcher Richard Fitts’ success on the mound has carried over into his freshman season in the Southeastern Conference with the Auburn Tigers in 2019.

Auburn has been without two key members of its pitching staff for the majority of the season due to injuries and Fitts has stepped in and played much bigger than a freshman, as he led the Tigers to a win over Ole Miss on Thursday, April 18.

With Auburn trailing by a couple runs in the early innings, Fitts entered the game in relief of Garrett Wade and turned in 4.1 scoreless innings while recording a career high four strikeouts, as the Tigers came back to defeat the Rebels 7-4 to pick up their ninth win in conference play.

Fitts exited the game at the conclusion of the seventh inning, as Auburn closer Cody Greenhill recorded the last six outs to get the save. Interestingly enough, Greenhill pitched for Russellville High School and was a member of the 2015 5A state championship team who defeated Helena that year in the Huskies first season in school history.

As for Fitts, he picked up his third win of the season after defeating UT Martin and South Carolina earlier this season in addition to Ole Miss.

Auburn currently sits in the thick of a tight SEC Western Division race at 9-7 as Texas A&M currently leads the division with a 10-5-1 record as of April 18.

Fitts should be a major factor out of the bullpen as the Tigers look to make another postseason appearance with roughly a month left to go in conference play.