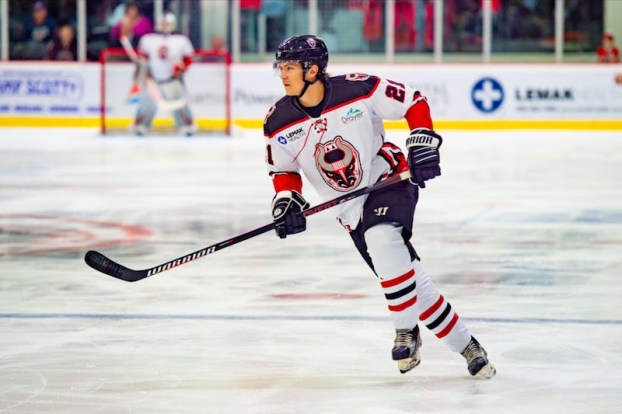 Birmingham Bulls defenseman Garrett Schmitz was one of the best players in the SPHL this season, but had to earn the opportunity by trying out for the team last summer. (Contributed)

Following graduation from Hamline University, Garrett Schmitz wasn’t sure what lied ahead, but deep down, the kid who laced up his hockey skates for the first time at the age of two was still inside of him and knew an opportunity would arise.

After an average hockey career at the collegiate level, Schmitz didn’t have a ton of interest from professional coaches due to lack of numbers, but having not seen him in person, many didn’t know what the defenseman was capable of and the dream he had of playing the sport at such a high level since he was 10 years old.

“I wasn’t 100 percent sure what was going to happen after graduating,” Schmitz said. “I knew I wanted to keep playing, but didn’t have many options, or really any. My college numbers weren’t the greatest, so I didn’t have any coaches reach out to me.”

That’s when a friend of Schmitz’s reached out to him and told him about a free agent camp down in Birmingham that was happening in July of 2018.

“I knew of the league, but not much about it,” he said. “I knew I wasn’t going to pass up on the opportunity though.”

He signed up for the tryout not knowing what to expect, but quickly made an impact.

“He actually sent an email to me before the camp, and I didn’t know who he was, but I did my homework and he didn’t disappoint,” said Birmingham Bulls head coach Jamey Hicks. “He could’ve waited it out to see if he got a tryout, but he didn’t.”

Coming from Minnesota where Schmitz grew up playing hockey on a rink built in his back yard by he and his dad during the winter, he was making a trip deep into the heart of Alabama in the middle of July looking to keep his dream alive.

“I thought to myself ‘This is it. If I don’t make this then my hockey career is probably over,’” he said. “That definitely created some nerves going into the camp.”

It didn’t take long for Schmitz to hit his stride and make a swift impact on the coaching staff.

The free agent camp is basically an open tryout for guys interested in pursuing an opportunity, and not a tryout for players the Bulls have sought out to be a part of team.

But one way to draw attention to the camp was the promise of one player from the tryout making it to preseason camp as part of the team.

“We normally talk about it for a few days after to make a decision on who that guy is going to be,” Hicks said. “But we called Schmitz back in basically before he left our facility.”

Schmitz said he felt confident in his ability once the nerves settled down, but he knew he still had to prove to the coaches that he was a guy worth taking.

“You could really tell he had a high hockey IQ,” Hicks said. “He’s an American that played junior hockey in Canada before going to college. He just knew he wanted to be a hockey player.

Hicks said he made a couple of calls up to junior leagues in Canada and Minnesota and that everybody he talked to raved about him.

“When you talk to people you’re close with in the sport and they rave about someone the way they did, then you feel really good about that person being the real deal,” Hicks said.

While he had made it through the tryout portion of the camp, there was still the preseason camp on the horizon to get ready for the season, and Schmitz still had to produce.

His ability on the ice, however, continued to make him not just a guy that was going to be on the team, but one that stuck out as a promising contributor for what the Bulls were hoping to accomplish.

“We needed more mobility on the back end,” Hicks said. “That was a focus of ours coming into the season. His skating ability showed us that could happen. When you skate and handle the puck well on the back end, you’ll be successful.

“As soon as we saw what we did in camp, we knew he was going to be a good one for us this year. I looked at Craig Lutes (assistant coach) and said, ‘He’s ready.’”

And ready he was.

As a defenseman, Schmitz went on to total 33 points with a plus-minus of 15 when on the ice, which was tied for third on the team. He took 101 shots and made 10 while picking up 23 assists after playing in a total of 51 games.

His 33 points and 10 goals were both the third best mark of any defender in the league. He also led all defenders with four game-winning goals this season.

All of those numbers, along with his effort on the ice, led to Schmitz being named to not just the All-Rookie Team, but also the All-League First Team.

“I don’t evaluate attitudes or talent, but he’s out there every single game busting his butt,” managing partner Art Clarkson said. “He wasn’t drafted and nobody was paying attention to him, but now he’s making a name for himself.”

While Hicks was high on his defenseman, the successful season even surprised the head coach saying “We’d be lying if we said we thought he’d get the amount of ice time he has before the season started.”

But with a little hard work and determination, Schmitz left no doubt early in the season and earned his time on the ice.

“I try not to pat myself on the back too much, but not knowing if I was going to be playing, it kind of gave me a little extra motivation to work on my game,” he said. “In pro hockey, you never really know when it’s going to be done so you give it your all while you can.”

He’s been an integral part of a special season for the Bulls that saw them go from second worst team in the league a year ago to second best this season.

Now they’re in the semifinals of the playoffs and one win away from advancing to the championship series.

“It’s been an awesome ride,” Schmitz said. “Right away in free agent camp, Jamey talked about building a team to win a championship in the second year the team has been in the league. Now, we have a good chance at making that happen.”

As for his future, Schmitz said he obviously wants to play at the highest level of hockey he can possibly get to, but humbly worded his goals knowing he just enjoys playing the game.

His coaches, on the other hand, have all of the confidence in the world that he’s a young star in the making.

“Leagues will recognize him in a couple of years,” Hicks said. “Expect him to be in the East Coast League next year. With his ability to move the puck and his high IQ of the sport, those strengths will help propel him to the next level.”

For the time being, Schmitz is enjoying the blessing of playing the game he’s loved since he first laced up his skates at the age of two and took to the rink in his back yard. His future is unknown, but his joy for the game isn’t.