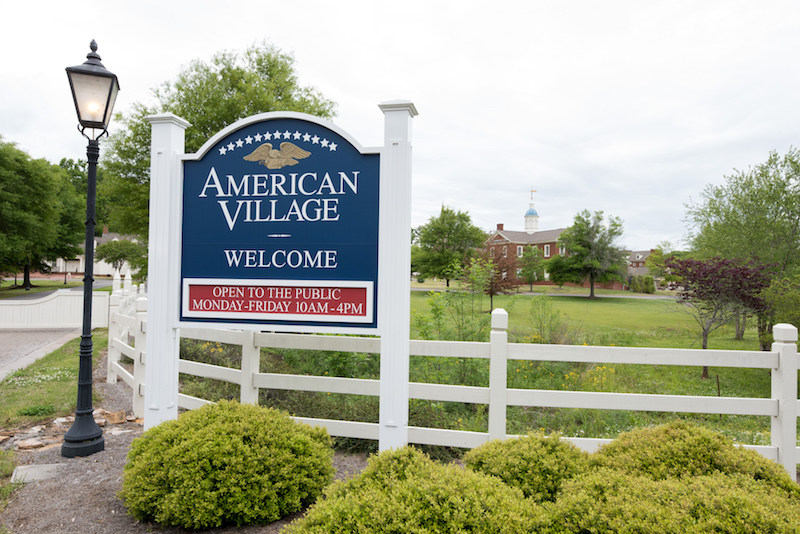 A group from the Class of 2019 Leadership County decided to focus on veterans and specifically, the National Veterans Shrine at the American Village for their community service project. (File)

MONTEVALLO – On July 4, 2012, ground was broken for the National Veterans Shrine at the American Village, and shortly after It opened in February 2014 a group with the 2019 Leadership Shelby County Class decided to help the cause roughly five years after the opening.

Patterned after Philadelphia’s Carpenters Hall, the shrine houses major sculpture and paintings by nationally-renowned artists depicting our veterans’ service and sacrifice for America and its freedom. Outside on the brick plaza, buried beneath a sculpture depicting liberty, are soils taken from blood-stained battlefields around the globe where Americans have paid the price of liberty.

The shrine houses the Veterans Register of Honor, a website and database containing the photographs, biographical sketches and stories of men and women in every generation since the American Revolution who have served in the armed forces of the United States of America.

Visitors are able to select and view personalized multimedia presentations honoring individual veterans at eight computer kiosks located within the National Veterans Shrine. It is a great learning tool for all who visit the American Village each year, specifically the youth.

Veterans and active members of the U.S. Armed Forces are encouraged to enter their service and biographical information, and to upload photographs and videos at Veteransregisterofhonor.com.

A group with the Leadership Shelby County Class of 2019 realized this has not been an easy task for many of our veterans and their families. It has been difficult to reach veterans due to various actors: age, technology challenges and more often than not, their humility.

This LSC group began a community service project last fall to help the American Village promote the Veterans Register of Honor, raise awareness within their respective communities and increase the number of entries into the database.

The American Village is one of Shelby County’s premier attractions, and a destination location for visitors from throughout Alabama and the southeast, including veterans. More than 700,000 students have visited the American Village on field trips since the campus opened in 1999.

“The legacies of our veterans are fading and we need to preserve them for younger generations. It is important for them to understand how their rights and freedom were obtained, as well as the personal costs to so many families. If we don’t tell them, then who will?” said one of the LSC volunteers.

These volunteers have attended numerous veteran events and have worked directly with veterans and their families to enter information into the Veterans Register of Honor database.

One of the main goals for the project is to significantly increase the number of entries from when the project started last fall. As a national database, there is plenty of room for growth, as Alabama alone has more than 400,000 veterans who could be included.

This data will help the American Village specifically market the database to them and increase the number of entries over time.

“Every veteran is someone’s child. Each took the oath of enlistment, and they pledged their lives to defend of our liberties. Their stories of service and sacrifice deserve to be told,” said Melanie Poole, Communications Officer at the American Village and staff liaison for the LSC group.

May 2019 is National Military Appreciation Month, and it also coincides with the Leadership Shelby County Class of 2019 graduation. There is no better way to honor our veterans than by securing their legacy for generations to come.

Please visit the American Village and go to a kiosk in the National Veterans Shrine. Watch one of the movies that is generated for each veteran using their personal information and photos that are submitted to the database. It is impossible to watch these stories and not feel appreciation for our veterans.