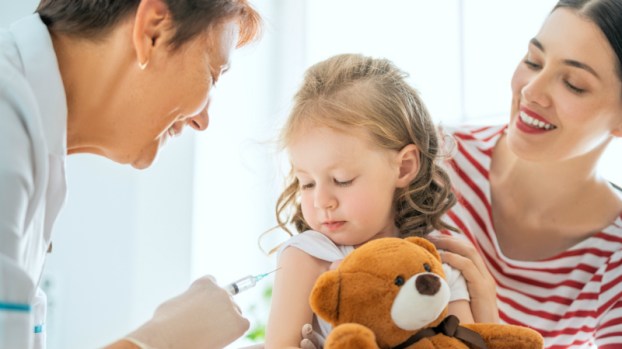 Outbreaks of measles across the United States this year have provoked passions on both sides of the debate about vaccinations for children.

While health professionals advocate for the safety and effectiveness of vaccinations, some parents maintain concerns, even to the point of outright refusal of vaccinations.

The Centers for Disease Control announced on Monday, April 15, that 555 cases of measles—a disease considered eliminated in the country in 2000—have been confirmed this year in 20 states. Less than one-fourth of the way through the calendar year, 2019 has already seen the second-greatest number of cases reported since 2000.

The outbreaks are attributed to international travel and reduced vaccination rates.

“They want to get that information from someone they can trust and resources they can trust,” Jolly said. “I try to be non-confrontational and just ask what are their specific concerns, and give evidence-based information we have to back up what we’re saying.”

“I typically find that once you kind of de-mystify that for people—most people set their minds at ease with that,” he said. “Very few people just flat-out refuse (vaccines), but there are some. Most are just concerned and want more information.”

“The majority of these parents think they already know,” he said. “They don’t want to hear the facts. They come in with their mind made up. It’s hard to be the primary physician in these cases. I tell them, ‘If you can’t trust my medical opinion with something like this, how can you trust me to treat something more serious?’

“At the end of the day, they’re putting their children at risk, and putting other people’s babies at risk.”

Spellmon said the adage used to be to not believe everything you see on television.

“Even more so now because of what is out there on the internet and social media,” he said. “You really have to do your due diligence on what to believe and what to trust. The most important thing to know is that vaccines work, which is evidenced by diseases recurring that we had just about abolished.”

Alabama law requires that public school systems require a certificate of immunization, or medical or religious exemption, in order for students to enroll.

School nurses monitor student immunization status at enrollment and beyond on a monthly basis, and they provide parents with information on receiving mandatory vaccines when they become due.

Officials estimated that about 1 percent of students enrolled in local public schools have been granted a vaccination exemption.

But public opinions remain mixed. Some people do not trust the information provided by doctors, while others insist that vaccinations are necessary for the greater good.

Pelham residents urged to give feedback on draft plans

PELHAM – Draft goals and recommended actions for the city of Pelham were presented at the Plan Pelham open house... read more