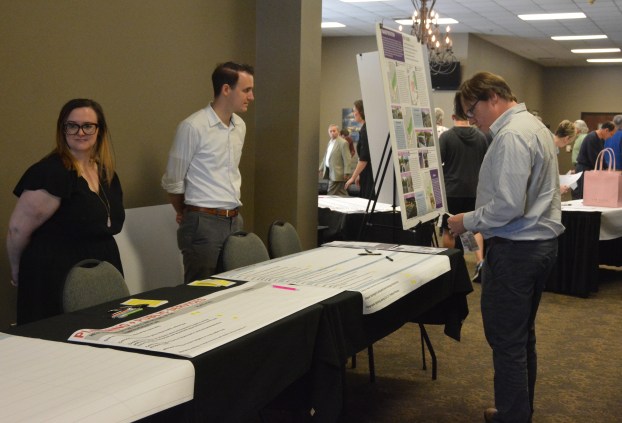 Those who attended the Plan Pelham open house on Tuesday, April 16, provided feedback on the recommended actions and goals for the city. The feedback will be used to classify each action as low, medium or high priority. (Reporter photo/Briana Harris)

Pelham residents urged to give feedback on draft plans

PELHAM – Draft goals and recommended actions for the city of Pelham were presented at the Plan Pelham open house on Tuesday, April 16.

The open house was hosted by the Regional Planning Commission of Greater Birmingham, the organization the city partnered with to complete its comprehensive plan.

The plan is based on the citizens’ vision of how they want the city to grow in the future, typically spanning 15-25 years.

According to Lindsay Puckett, principal planner with the RPC, the plan’s draft actions are the result of public input received since October 2018 through public meetings, surveys, online mapping tools, one-on-one interviews with elected officials and city department heads and steering committee meetings.

In order to prioritize issues, Puckett said those at the open house were asked to provide feedback by identifying which of the plan’s recommended actions are the most important to them. Those who did not attend the open house can provide input online at PlanPelham.com. Puckett said the feedback will be used to classify each action as low, medium or high priority.

Some of the actions being recommended include:

-Addressing the aesthetics of buildings along U.S. 31, such as through a stricter Overlay District or creating a façade improvement program to encourage business owners to renovate and improve existing commercial spaces.

-Refreshing branding and marketing efforts to promote the uniqueness of Pelham and promoting the city as an adventure and ecotourism destination.

-Expanding mobility options throughout the city, such as constructing the planned phases of the Bishop Creek Trail that will connect Bearden Road to Oak Mountain State Park and connecting Pelham’s neighborhoods to its commercial and recreation centers while bypassing U.S. 31.

-Amending the city’s Zoning Ordinance to ensure that future development and redevelopment is walkable, aesthetically pleasing and provides a mix of retail, services and housing types.