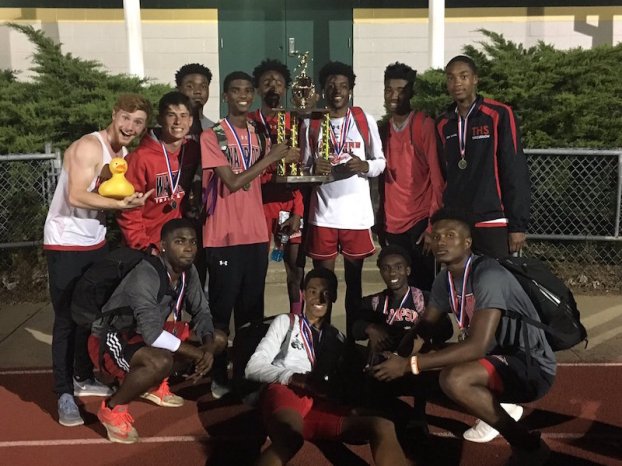 Thompson's boys and girls both took home the championship at the Shelby County Track and Field Championships. (Contributed)

PELHAM – With the track season winding down and the state meet less than two weeks away, one of the more fun events for local teams took place on Wednesday, April 17, when all track and field teams from across the county competed in the Shelby County Track and Field Championships.

While Thompson’s boys and girls continued to dominate this season by finishing first in both divisions, several teams had highlights and top-three finishers.

The overall standings for the boys saw Oak Mountain finish behind Thompson in second with Pelham just behind in third. For the girls, Pelham claimed second while Helena finished third.

It was a busy event with every athlete being from the county but below we have recapped the top three from each event that took place.

Vincent’s Tae McGregor took home his first of two wins in the event thanks to a time of 10.79 seconds. The sophomore beat out Thompson’s Sam Reynolds in second and Oak Mountain’s Aaron Brooks in third.

The 200-meter dash had two familiar faces in the top three, including the same champion, as McGregor finished the event in 21.98 seconds to pull off the win. Oak Mountain took the next two spots with senior Glen Humphrey finishing second and Brooks claiming third.

Briarwood’s Jake Nunn picked up his first of two podium finishes in the 400-meter dash thanks to finishing first with a time of 49.17 seconds. He beat out two sophomores from Thompson in Dominique Hall and J.B. Mitchell, who finished second and third, respectively.

Pelham’s first winner of the day came in this event when Dominic Fanella claimed the top spot thanks to a time of 2:00.08. Following him was Nunn in second and Brandon DeMarcus Lee of Thompson in third.

Thompson’s first champion came in the 1,600-meter run, as Jace Jones took the top spot with a time of 4:26.56. Behind him were Pelham’s Adam Keller in second and Helena’s Brady Barton in third.

Jones completed the distance-run sweep by finishing first in this event as well with a time of 10:06.34, which narrowly edged out Barton’s time of 10:06.44. Lee finished just behind in third for another podium finish.

Thompson’s AJ Caffey claimed first in this event with a time of 15.78 seconds, while Helena’s Christian Hill and Briarwood’s Nicholas Robson finished second and third, respectively.

Hall picked up another strong finish for Thompson in the 300-meter hurdles finishing first with a time of 40.83 seconds. He finished just ahead of Pelham’s Walker Lyles and Brayden Marlow in second and third, respectively.

Thompson won this relay event, while Oak Mountain and Calera finished in the two spots behind.

Oak Mountain claimed the top spot in the 4X400-meter relay, finishing just ahead of Thompson in second and Pelham in third.

The final relay saw the Warriors finish first, as they beat out Oak Mountain in second and Helena in third.

One of the state’s best, Trey Allen took home the top spot in the high jump clearing 6 feet, 4 inches, while Jonah Hyde of Helena and Jared Hurst of Thompson closed out the podium finishers.

Hyde finally broke through to win an event in the triple jump thanks to a distance of 41 feet, 4.75 inches, while Hurst finished second for Thompson and Andrew Robinson finished third for Pelham.

Another strong contender for a state championship this year is Oak Mountain’s Harrison Dimick in the discus throw. He posted a distance of 174 feet to blow away the field for the event win. Dorian Tolbert of Pelham finished second, while Oak Mountain’s Alex Burns finished third.

In the javelin throw, Jalen Thomas of Oak Mountain took home the win with a distance of 144 feet, 10 inches, while Briarwood’s Luke Hess and Chase Travis finished second and third, respectively.

In the final boys’ event, Dimick picked up his second win of the day for the Eagles thanks to a distance of 55 feet, 3.5 inches. He beat out Thompson’s Steve Villegas in second and Calera’s Phillip Douglas in third.

One of the country’s best sprinters, Oak Mountain’s Nicole Payne, won this event with a time of 12.05 seconds. Thompson’s Zakiria Holifield finished just behind in second, while Helena freshman Brooklyn Kirksey finished third.

Holifield came back to finish first in the 200-meter dash thanks to a time of 25.02 seconds, while Kirksey also improved and finished second. Calera’s Nia Maye took home third.

Pelham’s Katie Strozier claimed the top spot in the 400-meter dash thanks to a time of 58.07 seconds, while Maye finished second and Kirksey third.

Strozier won her second event of the night in the 800-meter run behind a time of 2:16.31, while Thompson’s McKenzie Hogue finished second and Oak Mountain’s Evie Bell finished third.

Hogue is one of the best distance runners in the state and came back to win the 1,600-meter run with a time of 5:09.71, while Pelham’s Alex Wilkins finished second and Westminster at Oak Mountain’s Hallie Porterfield finished third.

Hogue picked up another win in the 3,200-meter run with a time of 11:59.33, while Porterfield finished second just ahead of eighth-grade teammate Hannah Adams in third.

In the 300-meter version of the race, Henderson improved by a position to finish first thanks to a time of 45.89 seconds, while Thompson’s London Wooley finished second and Pelham’s Anna Wilkes finished third.

Thompson claimed the first relay race with a time of 48.34 seconds, while Oak Mountain and Helena closed out the top three.

In the 4X400-meter relay race, Oak Mountain overtook the top spot with a time of 4:13.28, to finish just ahead of Thompson in second and Calera in third.

In the final relay race, the top two spots remained the same with Oak Mountain finishing first with a time of 10:33.39, while Thompson claimed second. Pelham finished just behind in third.

In the high jump, Helena’s Allison Tanner claimed the top spot with a height of 5 feet, 4 inches. Just 2 inches behind was Long for Pelham in second. Thompson’s Julianne Knight took home third.

Niay Oden claimed a victory in the triple jump behind a distance of 37 feet, 5 inches, which was just ahead of teammate Alayah King in second. Tanner finished third for another podium finish for the Huskies.

Pelham’s Sarah Guthrie claimed her first of two victories in the pole vault event thanks to clearing a height of 9 feet, 3 inches. That beat Thompson’s Elizabeth Sutton by close to a foot. Westmisnter at Oak Mountain’s Reave Metcalf finished in third.

The discus throw was won by none other than Kirsen Gardner with a remarkable distance of 103 feet, 4 inches. Thompson’s Zoria Miller finished second, while Helena’s Victoria Brown claimed third.

Guthrie picked up her second win of the day in the javelin throw thanks to a distance of 97 feet, 2 inches, which won by just two inches over Westminster’s Maggie McCallum. Miller picked up another podium finish claiming third for the Warriors.

By ALEC ETHEREDGE | Sports Editor  NORTH SHELBY – Oak Mountain’s defense has been consistent all season on the pitch with... read more