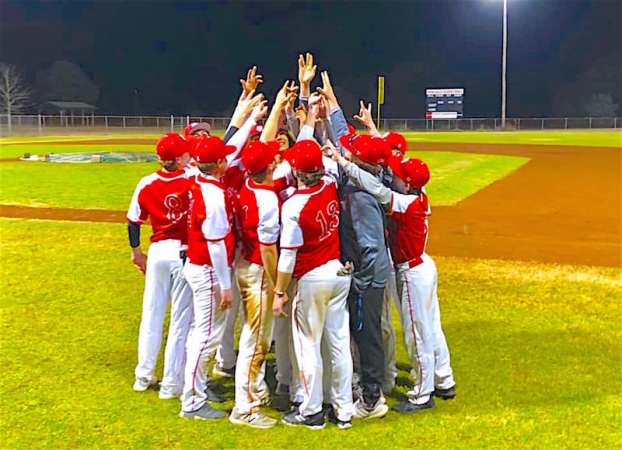 The Coosa Valley Rebels advanced to the quarterfinals of the AISA Class AA playoffs after sweeping Emmanuel by a combined score of 20-0 on Friday, April 20. (Contributed)

Coosa Valley advances to quarterfinals with sweep of Emmanuel

In the form of Kaleb Allen and Sammy Shepherd, the Rebels didn’t get the consistency they were looking for, but got two complete-game shutout efforts in wins of 7-0 and 13-0 to advance to the second round of the AISA Class AA playoffs.

Coosa Valley combined for 17 hits in the two-game sweep with the second game being a shortened mercy-rule game thanks to the 10-run rule. Emmanuel also had a total of 10 errors between the two games, while the Rebels only picked up one error.

A recap from each win is below.

Behind 14 strikeouts in a complete-game effort, Allen powered the team in game one allowing one hit on 103 pitches to lead the Rebels to a rather easy 7-0 victory.

Allen’s dominance the mound allowed the offense to pull away slowly throughout the game scoring seven runs on seven hits across four different innings, while also taking advantage of six errors by Emmanuel.

At the plate, Allen, Jackson Bryant and Tripp Allen all went 2-for-3 with one RBI to help the Rebels pick up the victory and back up Allen’s pitching performance.

Coosa Valley’s first run of the game came in the bottom of the first inning when Allen quickly gave himself some help on the mound.

After Jacob Walton walked to put a runner aboard, he eventually moved over to third with a steal and wild pitch. While a second out was then recorded, Allen stepped to the plate and calmly took a 3-2 pitch and singled to drive home Walton for the 1-0 lead.

Emmanuel put just one baserunner on in the first three innings, which allowed the Rebels to extend their lead in the bottom of the third.

With two outs in the inning, Coosa Valley was able to string together a rally and put together their best frame of the game starting with a single from Allen. That was followed by back-to-back errors that allowed one run to cross the plate.

One batter later, Bryant took the first pitch he saw and singled on a ground ball to the shortstop, which allowed a second run to come home. Then, during the final at bat of the inning, a third error in the last four at bats allowed Zane Jantz to come home for a 4-0 advantage through three innings of play.

The Rebels continued to threaten in each inning, and in the bottom of the fifth, an RBI single from Tripp Allen led to Trent Spratlin scoring the fifth run of the night.

Then, following another 1-2-3 inning on the mound, Coosa Valley added the final two runs of the game in the bottom of the sixth. A single from Cole Stroup and two errors on hits from Shepherd and Spratlin were responsible for the runs.

The strong effort in game one built the confidence of the Rebels heading into game two as they looked to close out the series and emphatically punch their ticket into the second round.

That’s just what they did thanks to 13 runs on 10 hits all in the first four innings. Combined with Shepherd allowing just three hits on the mound with a nine-strikeout performance, the Rebels were able to easily pull away for the 13-0 victory in four innings of play.

Coosa Valley got a quick start in the top of the first when Walton and Kaleb Allen led the inning off with a walk and double, respectively. That was followed by a groundout from Stroup, but he also picked up an RBI as Walton crossed the plate for the 1-0 lead.

Spratlin then drove in the second run of the inning on an RBI single, while the third run came later in the frame when he scored on a wild pitch.

Emmanuel actually had its first response of the two games in the bottom half of the first after loading the bases with no outs, but remarkably, Shepherd then forced an infield fly and struck out the final two batters to get out of the inning with no damage allowed.

The rest of the game was all Rebels.

After two half innings of each team going down in order, Coosa Valley stepped to the plate in the top of the third looking to put the game away and did just that.

Kaleb Allen led the inning off with a triple to start the threat. That was followed by three consecutive singles from Stroup, Spratlin and Josh Baker to drive home two runs.

Two errors the rest of the inning combined with RBI doubles from Bryant and Stroup, as well as a sac fly from Kaleb Allen, allowed the Rebels to score eight runs in the frame after batting around the order.

Up 11-0, the Rebels added two more runs in the top of the fourth on a fielder’s choice from Caleb Connelley and an RBI single from Kaleb Allen to close out the 13-0 victory.

Kaleb Allen led the way at the plate with a 3-for-4 game featuring two RBIs and two runs scored, while Stroup went 2-for-4 with three RBIs. Spratlin and Baker each picked up two hits as well adding an RBI apiece.

Next up for Coosa Valley will be No. 10 Patrician Academy (18-5) in the quarterfinals of the playoffs.