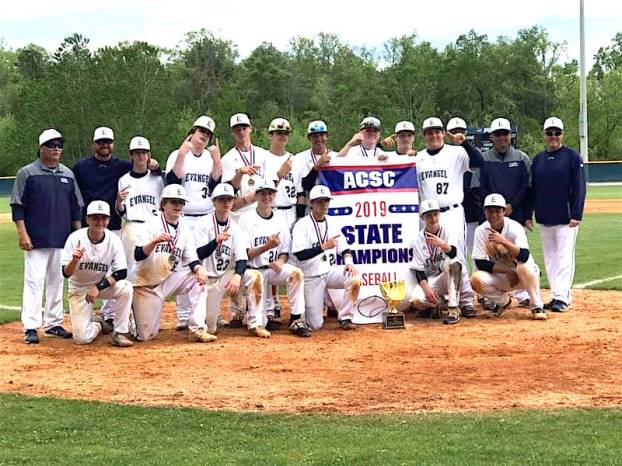 The Evangel Lightning closed out a dominant season with two wins against Ezekiel Academy on Saturday, April 20, by a combined score of 26-1 to win the 2019 ACSC State Championship. (Contributed)

ALABASTER – The Evangel Christian School baseball team saved its best baseball of the season for Saturday, April 20, which was a scary thought for the Ezekiel Academy Knights considering the Lightning went 19-5 during the regular season.

Evangel took advantage of that good baseball and beat the Knights by a combined 26-1 to sweep the ACSC State Championship series and claim the 2019 title.

After edging out the Knights 6-5 and 6-2 in their two regular-season games, the Lightning really turned up their pressure at the plate on Saturday to complete the season sweep and win the championship. They used a combined 15 hits to total their 26 runs in a dominant route of their rival.

More impressive with the dominant wins of 15-1 and 11-0, the Lightning didn’t have to played just one full game combined between the two games picking up 10-run rule victories in both games. A recap from each contest is below.

It didn’t take long whatsoever for Evangel to put the first game away, just one inning to be exact. After Ezekiel scored a run in the top of the first, the Lightning came back to put a 15 spot on the board in the home half of the inning to already end a game that lasted just three innings due to the mercy-rule final of 15-1.

In that unreal inning, Evangel stepped to the plate and immediately found the pop in their bats. The Lightning got one RBI double from Will Ferrell and two RBI doubles from Dawson Humphries, while also recording RBI singles from Charlie Yaeger, who hit two, Justin Humphries and Westin Akin.

Aside from those hits, Evangel also took advantage of seven walks, two hit batters and an error to post the 15 runs.

The Lightning were led by Yaeger at the plate with a 2-for-4 game featuring four RBIs and two runs scored. Dawson Humphries added two hits, two runs scored and an RBI. Justin Humphries and Seth Harrison each had two RBIs, while Ferrell added one hit and one RBI.

Akin, who was named the MVP of the state championship series, went 1-for-1 with two RBIs, two runs scored and one walk.

On the mound, Chase Jones got the start and allowed two hits and one run while striking out two batters in two innings. Evan Bourne got the close allowing no hits and no runs to put the game away.

Evangel spaced things out a bit more in the second game, scoring all of their runs in two innings instead of one to cap off an incredible day at the plate. The Lightning used six runs in the second and five in the fourth to close out an 11-0 victory in a shortened four-inning game.

After both teams went 1-2-3 in the first inning, Evangel got back in its rhythm quickly to kick off the second frame.

A ground out led off the inning, but the Lightning followed that with singles from CJ Carr, Eli Whitfield, Justin Humphries and Harrison in four of the next five at bats to not only drive in two runs but load the bases as well.

That was followed by Akin being hit by a pitch to drive in the third run of the inning for a 3-0 advantage. Following an infield fly, Jones singled on a ground ball up the right side that allowed both Justin Humphries and Harrison to come home.

The final run of the inning came when the Knights attempted to pick off Akin at third, but instead an error allowed him to come home for a 6-0 lead through two innings.

That led into a quiet third inning, but again, the Lightning weren’t going to stay silent for long.

In the top of the fourth, Akin was hit by a pitch again to lead off the inning. That set the tone for another dominant stretch for Evangel, as Ferrell and Jones hit back-to-back singles for a 7-0 lead.

Two more runs crossed the plate during Dawson Humphries at bat thanks to a passed ball and a fielder’s choice bringing home both Ferrell and Jones.

Up 9-0, the Lighting put their final two runs on the board behind a fielder’s choice from Whitfield and a ground out from Justin Humphries.

Ezekiel had no answer to keep the game alive in the bottom half of the inning, as Carson Monroe polished off the state championship with a 1-2-3 inning. He ended the contest with a complete-game effort allowing just two hits and striking out one in four innings of work.

Jones led the way at the plate this game going 2-for-3 with two RBIs and a run scored. Carr went 2-for-2 with two runs scored, while Whitfield and Justin Humphries each had one hit and two RBIs. Akin and Dawson Humphries added an RBI apiece and scored three combined runs.

The Lightning closed out their 2019 state championship run with a 21-5 overall record losing only to AISA No. 5 Bessemer Academy and No. 2 Autauga Academy.

Coosa Valley advances to quarterfinals with sweep of Emmanuel