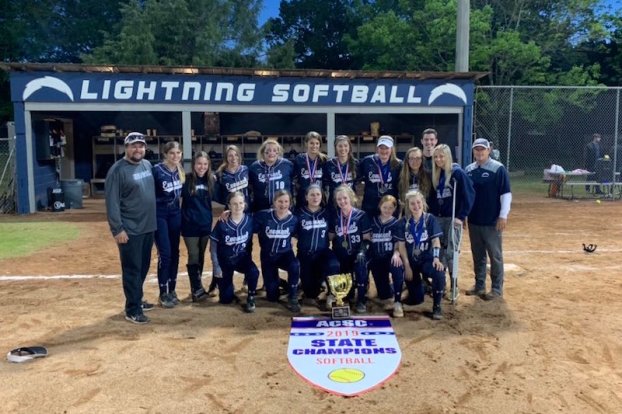 The Evangel Lightning capped off an impressive 17-8 softball season with a sweep of the Tuscaloosa Home Educators on Saturday, April 20, to claim the 2019 ACSC State Championship.

After a tightly-contested opener that featured a walk-off run on an error by the Warriors in a 3-2 victory in eight innings, the Lightning came back in the second game and wanted no part of a close game pulling away for a 16-1 victory in three innings in the second game to finish a clean sweep for the state championship.

The Lightning trailed the opening game of the series 2-0 entering the bottom of the sixth running out of chances, but that’s when they struck in a big way.

Down to their last out in the inning, Susie Landis stepped to the plate with a runner on third and quickly found herself in an 0-2 count. But on the fourth pitch of the at bat, Landis drove a hard line ball deep to center field that sailed over the wall for a two-run homer to tie the game at 2-2 and force extra innings.

That was just the beginning of the fireworks in a thrilling finish.

After both teams failed to win the game in the seventh, extra innings were needed to decide which team would have a leg-up in the series.

Following a 1-2-3 inning defensively, Evangel came back to the plate in the home half of the eighth looking to pick up the victory. Chloe Thornton gave the Lightning a good shot at doing just that thanks to a leadoff single to left field.

Following a groundout from Kaylee Fowler, she advanced to second base, which soon became key.

Before the next batter even got to take a swing at the plate, Thornton advanced to third on an error, and on that same error, she ended up crossing the plate as the mistake also cost the Warriors the game with Evangel claiming a 3-2 victory thanks to smart base-running.

Evangel only had two hits in the game, but both ended with runners crossing the plate thanks to the home run from Landis and the single from Thornton that eventually ended in the game-winning run.

Lola Jarrad got the start in the circle and pitched all eight innings allowing just five hits and two unearned runs while striking out an impressive 13 batters to keep her team alive for the win.

Evangel took all of the momentum from that thrilling win in the opening game and used it as fuel in the second game, especially in the early going, as the Lightning scored 11 runs in the first inning and five more in the second to account for all 16 of their runs in an easy 16-1 victory.

After being outhit in the first game, Evangel took no chances in the second game picking up nine hits to Tuscaloosa’s four.

The dominant effort started quickly in the opening inning thanks to four singles and a walk in the first five at bats. That rapidly put the Lightning out in front 4-0 before an out had even been recorded.

The fifth run was eventually scored on an error before the first out of the inning was recorded.

Following a single from Jorryn Hensley, a second out was recorded, but Evangel then went on to put together a two-out rally.

Three hit batters and a walk in the next four at bats led to two runs crossing the plate before Landis hit a two-RBI double and Avrie Ponder hit an RBI single to close out the 11-run inning for the Lightning.

The Warriors then went down in order in the top of the second, which allowed Evangel to come back to the plate to put the game away in the bottom half.

Another hit batter, an error and a single quickly loaded the bases to start the threat, before a fifth hit batter drove home the 12th run of the game.

During the next at bat, two passed balls and an error allowed all three baserunners to come home without the ball even being hit.

While the first out was recorded following those runs, Jarrad followed with a triple and was then driven home by Landis on a ground out to the pitcher, which put the Lightning on top 16-0 through two innings of play.

With the game all but over, Tuscaloosa could only muster up one run in the bottom of the third, which wasn’t enough to keep the mercy rule from being put into play.

Landis and Ponder each went 2-for-3 with four RBIs in the victory, while Jarrad went 2-for-2 with two RBIs. Presley Thornton added a hit and an RBI, while Kaylee Fowler added an RBI on two walks and Hensley and Thornton both added one hit apiece.

Jarrad got the start in the circle again and allowed four hits and one run earned run while striking out four.

The All-Tournament team included Landis as the tournament MVP, as well as Jarrad, Anna Donegan, Chloe Thornton and Presley Thornton.

By GRAHAM BROOKS / Staff Writer TUSCALOOSA – For the first time in two years, the Helena Huskies will not... read more