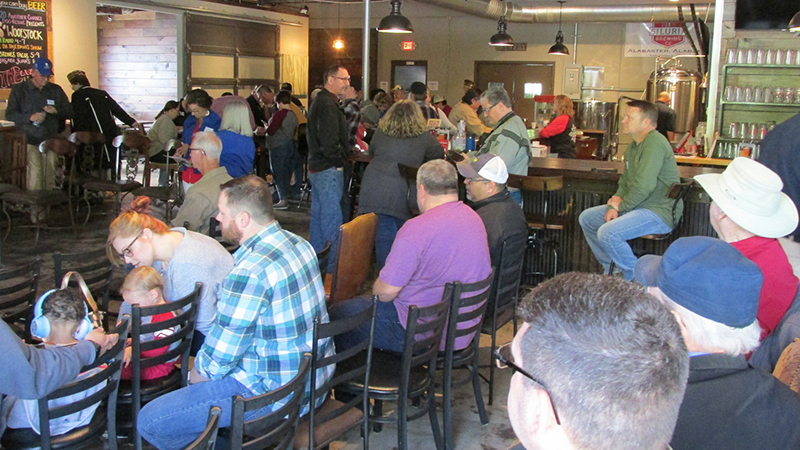 By Michael Brooks / Special to the Reporter

ALABASTER – More than 50 veterans convened in Alabaster on Saturday to establish the Lance Cpl. Thomas Rivers Memorial VFW Post. The meeting was held at the Siluria Brewing Company.

“We had 41 to register, and more came today,” said Alabama VFW Commander Jerry Anger of Gardendale. “There was a group in Alabaster once before, but it is defunct, so we’re happy for new interest.”

Anger said many posts are declining due to the age of veterans, and the last new Alabama post before Saturday was established in Atmore in 1996.

“We’re involved in starting four of five new posts currently, and Alabaster is one of several,” he said. “We tell the younger vets that they shouldn’t wait to join until they’re older, as many tell us. We tell them they need our organization now and will need it even more in the future.”

Anger said the VFW is open to veterans with service medals.

“This means they had ‘boots on the ground’ overseas, though not necessarily in combat,” he said. “For example, I served in the Indian Ocean with the U.S. Navy as a Chief Petty Officer, but didn’t see combat. Or members can have been a vital part of stateside support, such as an Air Force flight crew. And Special Forces members are welcomed since their work and locations were clandestine.”

Tracy Simmons of Calera was instrumental in the new post’s establishment. He served in the U.S. Air Force during Desert Storm.

“Vets need other vets to talk with,” he said. “The VFW is an outlet for them since civilians often don’t understand what we’ve been through.”

Simmons said vets often have to fight for their rightful benefits, but the VFW seeks to be their advocate.

Anger agreed that the VFW is a friend to veterans.

“We work all the time to help our servicemen, and we have an open door with the U.S. government,” he said. “Several of us were in D.C. lately and we did all we could do to promote veterans benefits.”

Nancy Connolly of Albertville, president of the Alabama VFW Auxiliary, attended the meeting and said she’s talking with families about an auxiliary in Alabaster, too.

According to the press release she distributed , the auxiliary is among the “oldest veterans’ service organizations and our members are the relatives of those who have served in overseas combat. We are a voice for veterans on Capitol Hill . . . and one of the top 10 providers of volunteer hours in the VA medical system.”

Gold Star mom Charon Rivers of Hoover, mother of Thomas Rivers Jr., was special guest. She said the naming of the post happened recently and was a “nice surprise.”