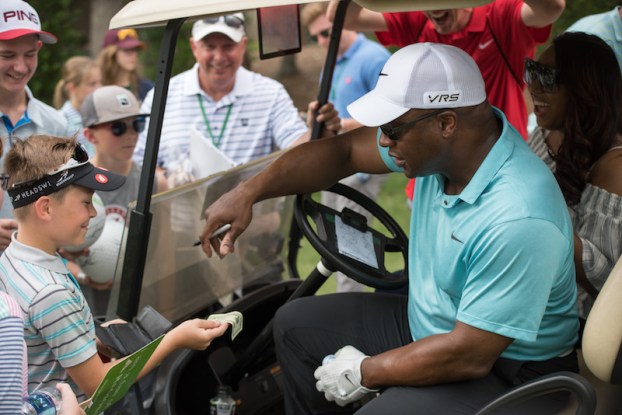 The Regions Tradition is set to take place May 8-12 with the Celebrity Pro-Am kicking the event off on Wednesday, May 8, followed by several days of entertainment. (File)

HOOVER – The 2019 edition of the Regions Tradition is quickly approaching with the fun-filled week at Greystone Golf and Country Club set to take place May 8-12.

The tournament will of course feature the always entertaining Celebrity Pro-Am on Wednesday, May 8, before giving way to the PGA Tour Champions first major championship of the year over the following four days with some of the game’s biggest names set to tee it up.

While the tournament will bring a ton of excitement to the area, including defending champion Miguel Angel Jimenez, it’s the Thursday tradition now known as the Football Capital of the South day that gets the crowd ready to go.

ESPN and SEC Network host Paul Finebaum of the Paul Finebaum Show will also be broadcasting alongside Laura Rutledge and McElroy during the event with interviews from several of the college football stars.

All of those celebs will take part in the pro-am starting Wednesday morning with tee times set between 6:50 and 9 a.m. as well as noon and 2 p.m.

There are also several other exciting events taking place throughout the week starting on Sunday, May 5, on the driving range starting at 4 p.m.

Throughout the four days of the tournament, there will also be fan-friendly events to entertain spectators.

On Saturday night, following play, the Black Jacket Symphony will present the Rolling Stones’ Sticky Fingers at the watering hole starting at the conclusion of play.

The watering hole is the Regions’ version of hole No. 16 at the Waste-Management Phoenix Open, which is known as one of the craziest holes in golf.

Not only will you have great views of the 178-yard par 3, but you’ll have access to the Chateau Souevrain Wine Lounge, the Michelob Ultra Club, the Tito’s Terrace and the new Avion Tequila Sun Bar.

And of course plenty of great talent will be on display as usual.

Jimenez will look to win for the second year in a row after claiming the first major championship of his career during last year’s win, while fan favorites John Daly, Fred Couples, Bernhard Langer, Vijay Singh, Colin Montgomerie, Steve Stricker, David Toms, Fred Funk and Kenny Perry are expected to play, as well as many more.

You can also buy tickets to the Cocina Club, which is located on the 10th green, for $350 a ticket which will include daily drink specials and food catered by Cocina Superior.

Kids 18 and under with a ticketed adult and all military personnel with a valid Military ID will get in free all week.

By ALEC ETHEREDGE | Sports Editor CALERA – For the second time this season, the Calera Eagles shut out the Wetumpka... read more