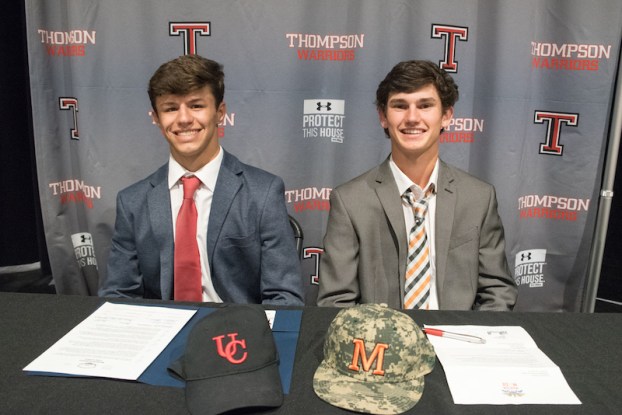 ALABASTER – Usually taking the spotlight in their respective sport, friends Nick Freeman and Chandler Akins got to share the spotlight on Monday, April 22, when each signed to play sports at the collegiate level.

“Nick has been a spark plug in our lineup the past two season,” Hamrick said. “He batted second in the batting order because of ability to handle the bat in that spot.”

As a junior, Freeman batted .325 at the plate and was named as an All-County Second Team outfielder for his efforts not only at the plate but defensively, both of which got even better during his senior season.

“Nick has played a solid center field for the past two seasons,” Hamrick said. “This season he ended up leading our team in hitting as well with a .368 average. That was solid, but if you could have watched him the entire season you would understand why Nick is such a special player for us.”

The first two weeks of the season, Freeman was batting .115 at the plate only picking up three hits in 26 at bats with three runs scored. The senior could have put too much pressure on himself with it being his senior season, but instead he remained calm and went on to bat .450 with 31 hits in 80 at bats while scoring 25 runs the rest of the season.

“He’s been such a good leader in our program both on and off the field and we’ll miss his contributions,” Hamrick said.

For Akins, he’ll leave Thompson as a decorated state champion for the Warriors’ wrestling program.

To wrestle at Thompson, you have to be one of the best not just in the state but the country, and Akins cemented himself as one of the best through what he accomplished in his four years with the Warriors.

The only year he didn’t win the state championship was his freshman season, and even then he qualified for the state tournament, which is tough for any wrestler to do, much less a freshman.

His legacy left on the Warriors includes not having lost to an in-state opponent in his last three years on the team, and will graduate as the third winningest wrestler in Thompson history.

Both athletes have exemplified great characteristics of leadership in their respective sport and it showed on the field and on the mat as they’ll hope to have that same impact at the next level.