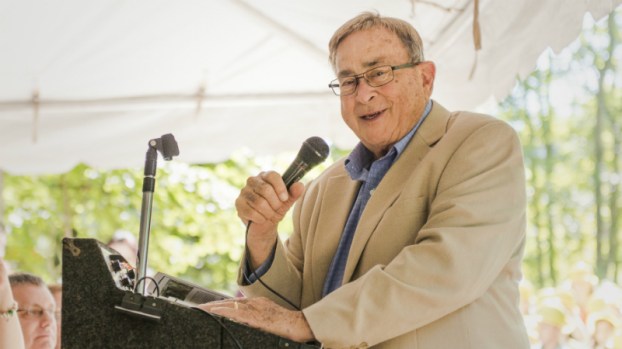 MT LAUREL – The unofficial “mayor” of Mt Laurel had an office with a scenic view of the town, but instead of sitting and observing, John Oscar Freeman Sr. spent his time driving around, phone attached to his ear, resolving residents’ concerns.

Freeman, who worked as construction manager and general manager for Mt Laurel for more than 15 years, died Monday, April 22, at the age of 88.

Mary (Peters) Knoechel began a receptionist job with the town in 2001, the same year Freeman started, and called him “the best boss I ever had because he cared about his employees.”

Freeman also cared deeply about the residents of Mt Laurel.

“Residents would call him night or day,” Knoechel said. “His phone was his main tool, and he would get things taken care of for people. People had his phone number, and if someone called to complain about a limb that may fall on their house, he would have it cut down that day. He was always doing for other people.

“His wife joked that he knew about the birthdays of other people’s children better than his own.”

Freeman is survived by his wife Marie Craft Freeman, who he lovingly called “Sugar,” and their six children, 17 grandchildren and 21 great-grandchildren.

Freeman was born in Birmingham and attended Woodlawn High School, Vanderbilt University and the University of Alabama.

He discovered his passion for construction at the age of 19, according to his obituary, and held the oldest active general contractors license in Alabama at the time of his death.

After being hired to oversee Mt Laurel’s construction, and later, sales, Freeman had a hand in much of the area’s progress, including serving as a sort of liaison between the developer, EBSCO, and organizations that would locate there, including businesses, Double Oak Community Church and Hilltop Montessori School.

“His impact was felt all over Shelby County,” Hilltop Head of School Michele Wilensky said. “He did so much for Hilltop and everyone else in Mt Laurel. He came to our groundbreaking for the gym, spoke and did everything to help us with all of our projects. He has been instrumental in helping us from before we built our LEED-certified building in Mt Laurel and also helping us with any zoning issues, construction and making sure our project went ‘on time and under budget.’”

Those close to Freeman were familiar with his strong Christian faith and passion for Alabama football, but he will be remembered by many for his kindness, generosity and willingness to help.

“He loved his job,” Knoechel said. “He loved Mt Laurel.”

A visitation is scheduled for 9:30-11 a.m. on Thursday, April 25, at Double Oak Community Church in Mt Laurel; with the funeral to follow.

Freeman’s obituary can be found here.

FROM STAFF REPORTS MONTEVALLO – On July 4, 2012, ground was broken for the National Veterans Shrine at the American... read more