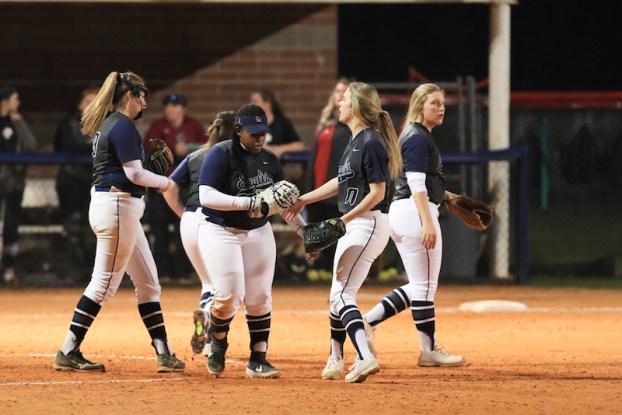 The Oak Mountain softball team picked up a dominant 13-1 victory over Hillcrest-Tuscaloosa on Tuesday, April 23, to honor its two seniors M’Kiyah Mitchell and Clara Fuller. (File)

NORTH SHELBY – Both M’Kiyah Mitchell and Clara Fuller have had special careers for the Oak Mountain Eagles with impacts felt beyond the softball field, but on Tuesday, April 23, the two were honored as the Eagles’ only two seniors on the 2019 softball team and went out with a 13-1 mercy-rule victory over Hillcrest-Tuscaloosa in their final home game.

Both Mitchell and Fuller reached base during the game, as Mitchell drew a walk and was hit by a pitch in two of her three at bats and Fuller went an impressive 2-for-2 with an RBI and two runs scored.

While it took an inning for the Eagles to get going in the game, once they did, they heated up in a hurry.

Hillcrest started the game with a run in the top of the first to take the early lead, but didn’t score the rest of the night, and Oak Mountain quickly made the Patriots pay in the bottom of the second.

The first three baserunners reached safely in the inning thanks to Mitchell being hit by a pitch and then Grace Hummel and Hannah Atwood hitting back-to-back singles.

Following the first out of the inning, Emily Hart walked in the Eagles’ first run of the game before Fuller gave them the lead for good with a special hit for the senior. She lined a single to right field that drove home Atwood for the early 2-1 lead.

That was followed by a bases-clearing double from Dawn Autry and a second double in a row from Riley Sullivan, as Oak Mountain had all of a sudden taken a 6-1 advantage through two innings.

The third inning went by quietly, but Abi Brown and Riley Sullivan flipped a switch between the fourth and fifth innings to put the game away with two swings of the bat.

In the bottom of the fourth, Brown blasted a three-run home run to straight-away center field to extend the Eagles’ lead to 9-1. Then an inning later, Sullivan stepped to the plate with two runners aboard following an RBI single from Autry and blasted a second three-run homer in as many innings over the left-field wall for the 13-1 victory.

At the plate, Autry, Sullivan and Brown each posted three or more RBIs, with Sullivan driving in a game-high four RBIs. Autry and Sullivan each went 2-for-4 at the plate, while Brown went 1-for-3.

Lacy Marty got the start in the circle and picked up a complete-game victory allowing three hits and one run while striking out four.

Walk-off base hit lifts Helena to comeback win over Moody