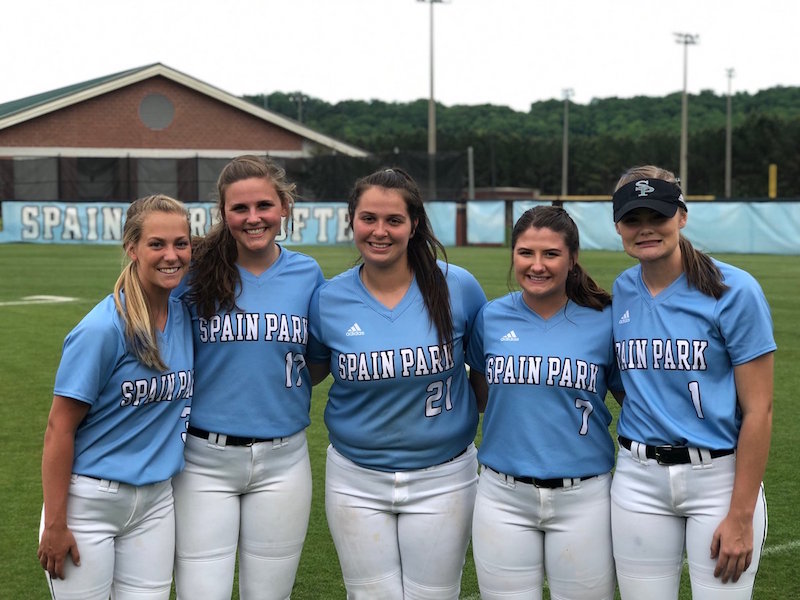 The Spain Park softball team honored its five seniors with a dominant 10-0 victory over Oakman on Tuesday, April 23. (Contributed)

HOOVER – Bailey Bowers, Maddie Majors, Kate Campbell, Caroline Wooley and Caroline Kendrick have all had an impact on the Spain Park softball team the last few years, and on Tuesday, April 23, they took to their home field for the last time in the regular season as the five seniors were celebrated on senior night.

While the Jags will host the area tournament, it marked the last time they’ll play in front of the home crowd without the pressure of elimination on the line, and each player that was healthy enough to play had an impact on the play.

Bowers, Majors, and Wooley all had at least one hit, while Campbell got the start in the circle and pitched a complete game to lead Spain Park to a 10-0 shutout in five innings.

Campbell allowed just four hits in the shutout performance while also striking out three batters. Her consistency in the circle allowed the Jags to pull away at the plate with nine combined runs scored between the third and fifth innings.

After a quiet opening inning of play, the scoring started when Bowers laced a line drive to center field that got down for a double and drove home Alexis Anderson, who singled earlier in the inning, for a 1-0 lead.

That marked all of the scoring for the first two innings of play, but in the third, Spain park ripped the cover off the ball.

Following a leadoff single from Lydia Coleman and a strikeout, there was one runner on with one out, but that was followed by three hits and two walks consecutively.

Taylor Harrington grabbed an RBI single to kick start the run scoring before Majors hit an RBI double to center field to make the score 3-0. Following a walk to Anderson and a wild pitch that allowed Majors to score, Bowers picked up her second RBI of the game on a single to the left side of the field, which drove home Anderson for a 5-0 lead.

A scoreless fourth inning followed from both teams, but the Jags stepped back to the plate in the bottom of the fifth up 5-0 looking to close out the game.

With one out, Bowers and Wooley hit back-to-back singles before Lindsay Parker doubled to right field to drive Bowers home for a 6-0 advantage.

After another walk to Campbell, Mackenzie Thompson, Annabelle Widra and Harrington hit three consecutive doubles to drive in the final four runs of the game in a mercy-rule win.

Bowers led the Jags with a 3-for-3 game featuring two RBIs and one run scored, while Harrington picked up two hits with two RBIs. Widra, Majors, Anderson, Wooley, Parker, Coleman and Thompson each added one hit, while Thompson drove in two RBIs.

Thompson improves to 31-3 with senior-night win