Thompson improves to 31-3 with senior-night win 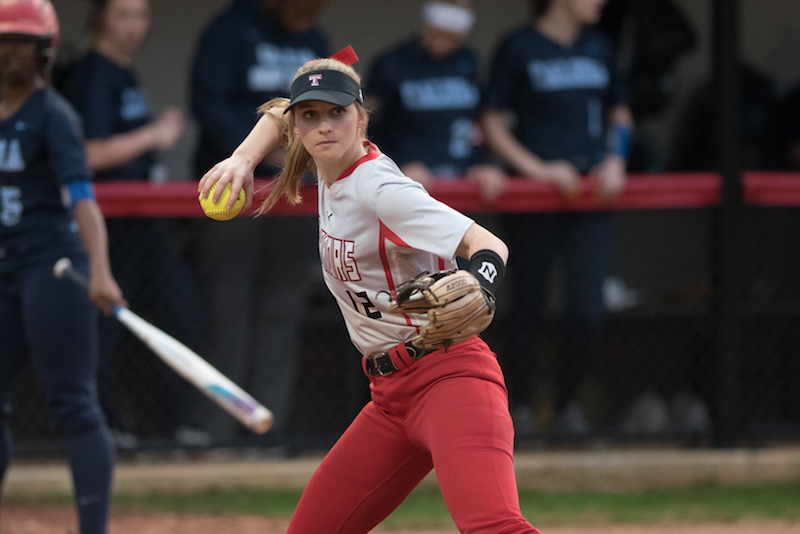 The Thompson Warriors improved to 31-3 with a victory over county foe Calera on Tuesday, April 23, which also marked senior night. (File)

ALABASTER – On a night when the Thompson Warriors celebrated their seniors, the softball team sent them off with a special gift thanks to a 13-6 victory over county foe Calera behind 15 hits on Tuesday, April 23.

The Warriors put up three-plus runs in three of their six innings at the plate and scored at least one run in all but one inning of the game.

Calera, however, was the team that came out on fire in the first inning.

The Eagles were able to strike with three runs in the top of the first to quickly take the lead. The bulk of those runs were scored on a two-RBI double from Michaela Landrum. She then scored the third run for a 3-0 lead after stealing third and then scoring on an error.

In the home half of the inning, Thompson picked up a leadoff single from Kindall DeRamus, but could only answer with one run on a sacrifice fly from Grace Robertson.

But after a quiet half inning at the plate from the Eagles in the second, Thompson came back looking for another answer.

Following a walk and single from Madison Plunkett and Lauren Cabiness to start the inning, Heaven Rodgers stepped to the plate with one down in the frame and hit a fly ball deep over the center-field wall to quickly put the Warriors up 4-3.

The third inning went by quietly, but for the second time in the game, Calera put three runs on the board in the fourth to reclaim the lead.

The Eagles took advantage of back-to-back one-out walks in the inning when Baylee Head came to the plate with two down in the inning and lined a triple to left field. At the end of her at bat, Calera had stormed back in front 5-4.

Then, one batter later, Emma Harrison singled to left field to drive home Head for a 6-4 advantage.

The lead, however, didn’t last long.

In the bottom of the fourth, Thompson stepped back to the plate and with one out in the inning, the Warriors striped back-to-back singles from Abby Kellogg and DeRamus, the second of which drove in Kellogg.

After an error and second out were recorded, the Warriors had Laruen Haskins and DeRamus on second and third with two outs. Mikayla Touhey then stepped up and brought both baserunners home on a two-RBI single that put the Warriors in front 7-6, and this time, they didn’t relinquish the lead.

One inning later with their bats alive, the Warriors put the game away with a five-run frame. Thompson scored the runs thanks to three singles, a double, a walk and an error.

The Warriors then added the final run of the game in the bottom of the sixth with an RBI double from Rodgers to cap off the 13-6 victory.

Thompson was led by DeRamus, who went 4-for-5 with an RBI and three runs scored. Robertson went 2-for-3 with two RBIs, while Rodgers went 2-for-2 with four RBIs. Kellogg added two RBIs after going 2-for-2.

Calera was led by Landrum who went 1-for-4 with two RBIs, while Emma Harrison had one RBI after a 2-for-4 game.