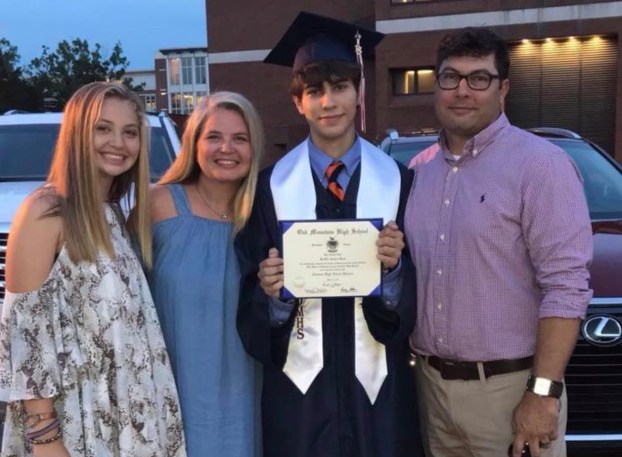 Eric Gaut, right, is in the running to be the Leukemia and Lymphoma Society’s Man of the Year. He is pictured with his wife and children. (Contributed)

1-mile walk to raise money for leukemia is May 18

PELHAM – After being diagnosed with leukemia in 2014 and winning his battle, Eric Gaut has made it his mission to give back to the Leukemia and Lymphoma Society in the hopes of helping others in the same situation he was once in.

Gaut, a husband and father of two, is in the midst of a 10-week fundraising competition for LLS for him to be named the Man of the Year. The organization’s Man & Woman of the Year program is a philanthropic competition to support blood cancer research. Candidates in communities across the United States form fundraising teams and compete in honor of two local children who are blood cancer survivors. Gaut’s team is made up of his family members.

Margarita Grill’s upcoming Guac-A-Mile family fun walk will raise money for Gaut’s campaign. In addition to Margarita Grill, The Insurance Network serves as a sponsor for the event.

The 1-mile fun walk is set for Saturday, May 18, at 10 a.m., rain or shine. The walk will begin at Margarita Grill, loop around the Pelham Civic Complex and then back to the restaurant.

On April 8, the restaurant donated 25 percent of its proceeds from 5-9 p.m. to Gaut’s campaign, but the owner of the restaurant wanted to do more to help. That’s when the idea for Guac-A-Mile came about.

The event is $15 per person and includes a T-shirt. Children 12 years old and under are free. The first 25 people to sign up also receive a Margarita Grill drink voucher.

Registration begins at 9 a.m. on the morning of the walk. Pre-register by donating $15 online at Pages.mwoy.org/al/bhm19/gwoodrow. In the message box on the website, mention that the donation is for the Guac-A-Mile event and include a T-shirt size. Participants can also register in person at Margarita Grill starting May 3.

By NEAL WAGNER / Managing Editor While not the top in the state, Shelby County ranked high for the amount... read more