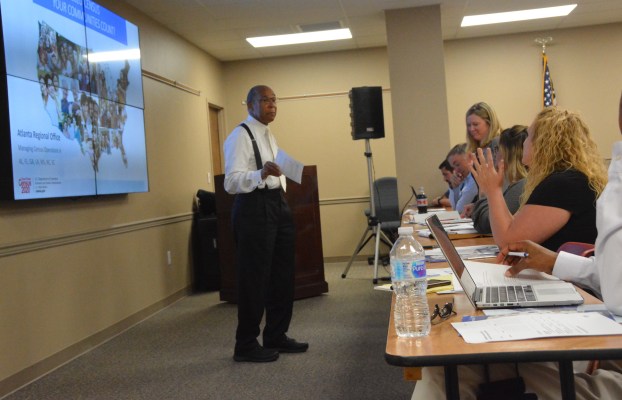 Shelby County’s community services manager Reggie Holloway speaks to the county’s Complete Count Committee about how important their role will be in the 2020 count. (Reporter photo/Briana Harris)

Every person counted: Shelby County gets ready for 2020 Census

PELHAM – A team of local leaders gathered at the Shelby County Services building on Tuesday, April 23, to discuss the U.S. Census Bureau’s upcoming 2020 count and the different ways they can play a role encouraging residents to take part in it.

The mission of the county’s 65-member Complete Count Committee is to educate, engage and encourage participation in the Census, said U.S. Census Bureau representative Carletta Singleton.

In 2010, the Shelby County and two other counties logged the highest Census participation in the state with 80 percent of people taking part. This time around, county leaders have set a goal to have 90 percent participation.

All 13 libraries have agreed to waive the requirement of needing a library card to use computers and will allow residents to use their computers to complete the Census even if they owe money to the library.

Singleton said there are sometimes misconceptions about the Census process. Census data is confidential and residents’ information is not shared with any other branch of government or department. The Census Bureau also cannot receive information about residents from other government departments. Violating privacy laws could result in up to five years in jail and fines up to $250,000.

Cole said gas tax money can only be used for concrete, bridges, asphalt, roads and anything else related to roadways and bridges. With 45 bridges that are more than 50 years old, Cole said the county is in need of gas tax money.

“We have several that are functionally deficient,” he said.

Each resident counted is worth about $1,567 in federal and state funds that are allocated based on population. Singleton said the Census helps direct more than $675 billion in federal funding. Census data is used by businesses, government entities and civic groups to help guide decision making.

Various think tank organizations have projected that Alabama will lose a congressional seat as a result of the 2020 count, but leaders in Shelby County are determined to do their part to help prevent that from happening.

Singleton said undercounting children is a problem because children can have so many different living situations.

“The child could be back and forth between homes, in foster care, living with a grandparent or another relative,” she said. “The Birmingham metropolitan area is third in the nation for single parent homes – third in the nation. It’s important that they be counted too because there are government funded programs like Medicaid, head start programs and the foster care system that use data from the Census to allocate funds.”

Singleton urged the group to begin thinking about Shelby County specifically and come up with a plan to reach those who are hard to count.

At the group’s next meeting, Shelby County’s community services manager Reggie Holloway said the group will begin looking at possible funding sources so that a budget can be created to help with advertising.

The Census jobs will pay $18 per hour, and offer paid training and mileage reimbursement. To be eligible for the jobs, applicants must be at least 18 years old, be a United States citizen, have a valid Social Security number, be able to pass a background check and have reliable transportation, Duncan said. Those interested in applying for the jobs should visit 2020census.gov/jobs.

1-mile walk to raise money for leukemia is May 18

PELHAM – After being diagnosed with leukemia in 2014 and winning his battle, Eric Gaut has made it his mission... read more