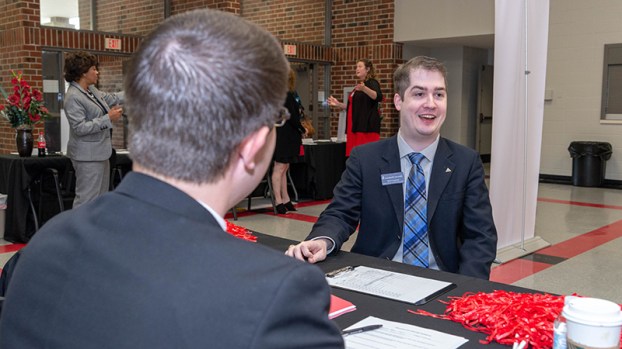 ALABASTER – Dozens of potential teachers had a chance to get to know their possible future colleagues during an Alabaster City Schools district-wide hiring fair on the morning of April 26.

ACS held the fair in the lobby of the old Thompson High School building, and invited about 85 teacher candidates from a multitude of colleges throughout the Southeast who are interested in working for the school district.

“It’s a great opportunity for the candidates to meet people in the district, and ultimately to get hired,” said ACS Coordinator of Human Resources Dr. Latanza Harrison, who worked to organize the fair. “We have a number of vacancies, so this helps us to fill those.”

After candidates arrived, they had a chance to chat with school leaders and schedule one-on-one job interviews with the schools they were interested in.

Harrison said this year marks the second straight hiring fair the district has hosted, and said last year’s fair resulted in several hires for vacant teaching spots throughout ACS, particularly at the end of the school year.

Katherine Stanton, a Vestavia Hills native who is graduating from UAB this spring, said she is interested in working for ACS and possibly moving to Alabaster after getting married this summer.

“I’d love to get hired by ACS. I actually met some of the district leaders at the UAB career fair, and I really clicked with the people I talked with,” Stanton said. “I always thought of a job interview as a completely one-way process, and here it’s been more of a two-way dialogue. I love Alabaster as a city, and I’d love the chance to work here.”

‘Out of the Blue’ and director nominated for national awards

FROM STAFF REPORTS CHELSEA – Chelsea High School’s vocal ensemble and its director are the only Alabama representatives to be... read more