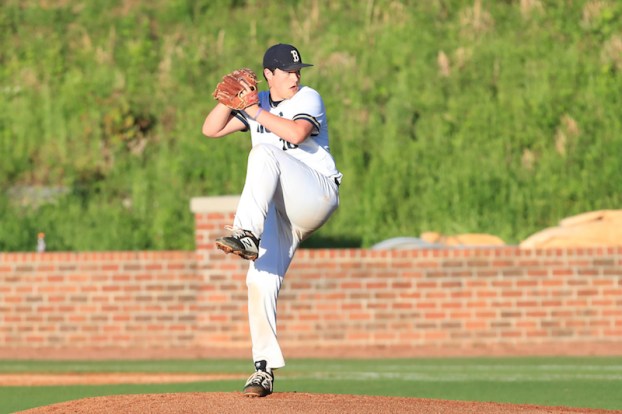 The Briarwood baseball team swept UMS-Wright in the second round of the Class 5A playoffs to earn a spot in the quarterfinals. (File)

MOBILE – Trailing 10-4 through five innings of a second-round playoff matchup against No. 9 UMS-Wright, the Briarwood Lions found themselves in a tough spot on the road on Friday, April 26, before a two-inning stretch completely flipped the series around.

In a best-of-three format, the winner of game one has a clear advantage moving forward needing just one more win in two games, and in the top of the sixth, the Lions came out like a team that knew that.

Briarwood posted six runs in the inning to tie the game at 10-10, before then coming back and posting two more in the top of the seventh to complete the comeback victory by a final score of 12-10.

With that improbable comeback, the Lions not only picked up a win, but stole the momentum of the series with their offense gaining life ahead of game two.

Briarwood came back in game two and followed up its 13-hit, 12-run performance by posting eight more hits and seven more runs in a 7-0 shutout. But what really turned the series around was the pitching.

After giving up 10 runs through the first five innings of game one, the Lions didn’t give up another run the rest of the night to pull off not only a comeback in game one, but a series sweep to advance to the quarterfinals of the Class 5A playoffs.

A recap from each win is below.

A thrilling first four innings of the series opener turned into what looked to be a blowout through five innings after six combined runs from UMS-Wright between the bottom of the fourth and fifth innings.

Briarwood, however, turned up the heat at the plate in the top of the sixth and seventh innings to complete an impressive comeback. The Lions put together five walks, four doubles and three singles between the two innings to wipe away a six-run deficit and storm in front for a 12-10 win.

The Lions struck first in the game on back-to-back RBI singles from Carson McKinney and Sam Hamner for a 2-0 advantage early. Those two singles were two of five in the inning from Briarwood.

UMS-Wright, however, answered back with a three-run bottom half of the frame to take its first lead of the night.

The back-and-forth game was just getting started as the Lions tied the game in the top of the second only to see the Bulldogs jump back on top 4-3 in the bottom half.

That’s when the chaos truly ensued. Briarwood tied the game again at 4-4 in the top of the fourth off a fielder’s choice, but UMS-Wright then took its largest lead of the game with two runs in the bottom of the fourth.

The Bulldogs then stepped back to the plate in the bottom of the fifth and looked to really put the game away with four more runs, which put them up10-4 through five innings.

Since the opening inning, Briarwood hadn’t shown much life at the plate and trailed by six needing to string together hits.

That’s exactly what happened in the top half of the sixth.

Following a walk to Bryce Perrien to lead off the inning, Parker Hutson and Wesley Helms laced back-to-back singles, the second of which drove home a run.

Blake McKenna then grounded out to put the first out on the board, but he also drove in Hutson for the second run of the frame. Carson McKinney kept the magic going with an RBI double that brought the Lions to within three runs.

After another out was recorded, it looked as if that might be as close as the Lions would be able to get, but a walk to Eli Steadman breathed more life into the team.

That’s when Christian Ferguson and Tyler Waugh stepped to the plate in back-to-back at bats and had the two biggest hits of Briarwood’s season as each hit RBI doubles. Ferguson drove in two runs, while Waugh drove in one to tie the game at 10-10 through six innings of play.

UMS put two baserunners aboard in the bottom of the sixth, but a Noah Whatley strikeout ended the damage and brought the Lions hot bats back to the plate.

Briarwood split outs with hits in the first four at bats of the frame picking up a double and single from Perrien and Helms, respectively. Then, the bats got a rest, as UMS-Wright walked three consecutive batters to bring home what ended up being the game-winning runs, as the Lions took a 12-10 lead through the top half of the seventh.

Whatley stepped back on the mound in the bottom of the seventh and not only closed out the comeback with a 1-2-3 inning, but closed out a complete team pitching performance as the Lions went six pitchers deep in the bullpen in the win.

Briarwood was led by Helms with a 3-for-5 game featuring two RBIs. McKinney added a 2-for-4 game with two RBIs, while Steadman went 2-for-3 with one RBI. Hamner and Ferguson both added two RBIs on one hit apiece, while Waugh went 1-for-2 with an RBI. Hutson added two hits and two runs scored.

Having stolen all of the momentum away right at the end of game one, Briarwood knew it had to come out and take advantage of that early in game two while the Bulldogs were still wondering how they lost the opener, and that’s exactly what the Lions did en route to a 7-1 victory.

They quickly jumped on top 6-0 through the first three innings of play thanks to scoring at least one run in each inning. The Lions then added one more insurance run in the bottom of the fifth and only allowed one run in the top of the seventh to complete the sweep and advance to the quarterfinals.

Briarwood’s early lead in the second game came in large part to command issues from UMS Wright’s pitcher. In the first three at bats a walk was sandwiched in between singles, one of which was an RBI single from Helms.

Two strikeouts and a walk followed before Steadman was hit by a pitch allowing a second run to cross the plate for a 2-0 lead at the end of the first.

In the second inning, it was the same story, as Waugh was walked to lead off the inning before eventually coming around to score after two wild pitches.

Those two innings set up for Briarwood to really put the pressure on in the bottom of the third.

With two outs and one runner aboard, the Lions were able to put together a two-out rally. Blake McKenna got it started with an RBI triple to drive home one run. That was then followed by an RBI single from Waugh for a 5-0 advantage.

Two batters later, after a Perrien walk, Hutson singled to right field to drive in one more run in the inning and put Briarwood on top 6-0 through three innings.

Briarwood posted one more run in the bottom of the fifth when Hamner drove home Helms with an RBI single to close out the 7-1 victory.

Noah Whatley got the start on the mound and pitched the first four innings allowing five hits and no runs while striking out four. McKenna closed out the final three innings and allowed one hit and one run, while also striking out four.

The Lions will now take on either Chilton County or Beauregard in the quarterfinals of the playoffs on Friday, May 3.