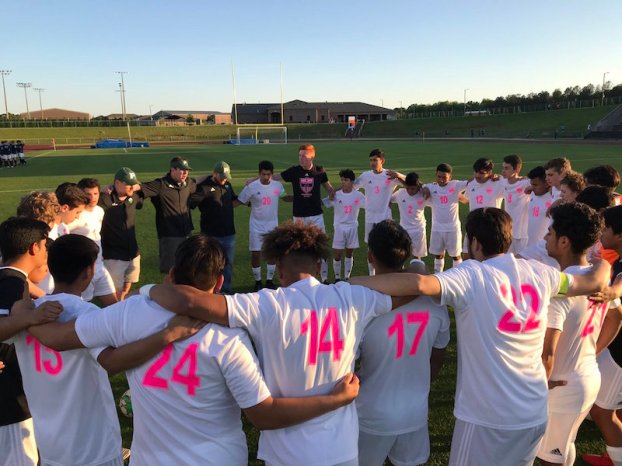 Pelham’s boys soccer team won a thrilling 2-1 game over No. 2 Northridge in the first round of the playoffs on Friday, April 25. (Contributed)

Pelham upsets No. 2 Northridge in round 1

TUSCALOOSA – Down a man after two red cards late in the first period, Pelham’s boys soccer team had its back against the wall in a 0-0 first-round playoff game with Northridge on Friday, April 26, and it was at that point that many might have started doubting the Panthers and attributed a difficult situation to a season of misfortunes.

Sitting at 12-9-1 heading into the matchup, the Panthers had been on the difficult end of seven one-goal games this year to highly ranked opponents.

With that misfortune and a 3-0 loss to Northridge on the road earlier this season and throw in being forced to play a man down, Pelham not only had a point to prove, but redemption to claim.

It led to one of their best performances of the season against a championship-caliber opponent playing outmanned.

The Panthers pressed Northridge all night despite having one less player on the field, and it paid off in the second half as Eber Serrano and Jaylen Cook both scored goals to put Pelham on top 2-0 late.

Northridge scored one goal in the final five minutes, but it was the Panthers resilient effort that earned a 2-1 victory to prove they have what it takes to win a state championship despite a season of bad luck.

The first key goal came seven minutes into the second half when Pelham caught its first break of the game by earning a penalty kick.

After the red-card incident near the end of the first half, the Panthers faced some adversity, but to get a penalty kick so early in the second half helped their confidence.

Eber Serrano earned the kick and after taking a second to lineup his shot, Serrano took his strides toward the ball and fired away. The keeper dove to his left on the guess, but Serrano’s shot was sent the opposite direction and buried into the back of the net for a 1-0 lead with 33 minutes left to play.

Throughout the first half, Pelham controlled the temp of the contest and seemed to be pressing more than Northridge, and after that first goal, the Panthers knew continuing to do so would eventually lead to another goal.

Despite the risk of being beaten defensively due to being down a man, Pelham continued to go after each opportunity, and sure enough it paid off.

With 24 minutes remaining, senior Jaylen Cook found the ball on the end of his foot, and emphatically put his team on top 2-0.

To that point Northridge hadn’t taken too many chances offensively, but down two goals late, the Jaguars had to start pressing.

It took 10 minutes, but they finally got on the board thanks to converting a long free kick that cut Pelham’s lead to 2-1 with 14 minutes to play.

After several close losses this season, however, Pelham was determined not to feel that pain again, especially with its season on the line.

Over the final 14 minutes, Northridge pressed and looked for shots, but the Panthers were able to stave off every chance and preserve the 2-1 victory to advance to the second round of the playoffs.

Now, Pelham will get another shot at redemption after its first-round win thanks to a rematch with area foe Chelsea for the third time this season. Two of the Panthers’ seven one-goal losses were to the Hornets this season by finals of 2-1 and 1-0.

With the win over the Jaguars, they’ll be going into that matchup on Tuesday, April 30, with a season-high confidence level.