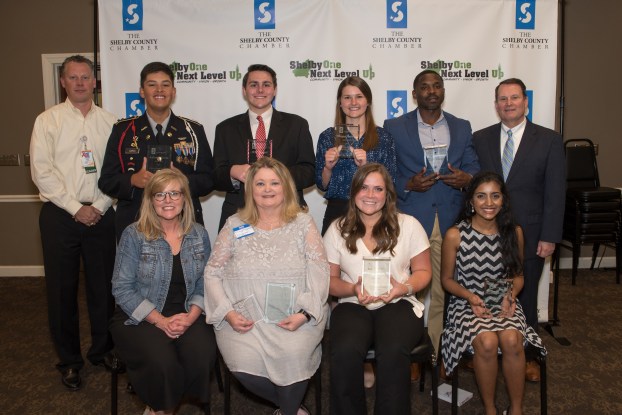 The Shelby County Chamber awarded a total of $7,250 to winners at its sixth Student and Educator of the Year luncheon on Wednesday, April 24. (Reporter photo/Keith McCoy)

PELHAM – Eight educators and students from throughout Shelby County were recognized as being the best of the best at The Shelby County Chamber’s sixth Student and Educator of the Year luncheon on Wednesday, April 24.

Each school in the county was invited to submit a college ready and career ready Student of the Year nominee to represent their school. All of the nominees were evaluated based on GPA, extra-curricular activities, awards, an essay and letters of recommendation. The students also participated in interviews with a panel of judges.

Two winners were selected in both the career and college ready categories and one student was chosen as the Future Leader of the Year, an award that was given for the first time this year.

“The Future Leader of the Year award went to the student who really left an impression on the judges,” said Pari Barzegari, Chamber manager of community and career development. “This student is well-rounded, not necessarily the student with the highest GPA.”

School principals nominated Educators of the Year in three categories – elementary, middle and high school. These educators were evaluated based on their teaching philosophy, community involvement and recommendations from colleagues and school administrators. One winner was selected in each category.

Each of the student winners received $1,000 to use toward continuing their education or career development, and the educators received $750 to be used in their classrooms. The Chamber awarded a total of $7,250.

Jeffries, an educator of 18 years, said he’s humbled by the recognition.

“When you’re dealing with people’s children, it becomes a calling – not just a job,” he said. “You treat it with respect.”

Jeffries said he plans to use his award money to purchase new P.E. equipment and balls for the gymnasium.

Korrapati said she was thrilled to be named Future Leader of the Year.

“Honestly, I wasn’t expecting it but I’m so thankful to my parents, teachers, mentors and everyone who has helped me along the way,” she said. “This award is really for them also because I couldn’t have done without them.”

Korrapati will attend the UAB in the fall. She intends to major in biomedical sciences and then go to medical school to become a physician. She plans to use her award money to purchase school books.

“I always wanted to use my love of science to help others and serve people to the best of my abilities,” she said.

FROM STAFF REPORTS There’s no way to predict when or where an accident will happen. That’s why the American Red... read more