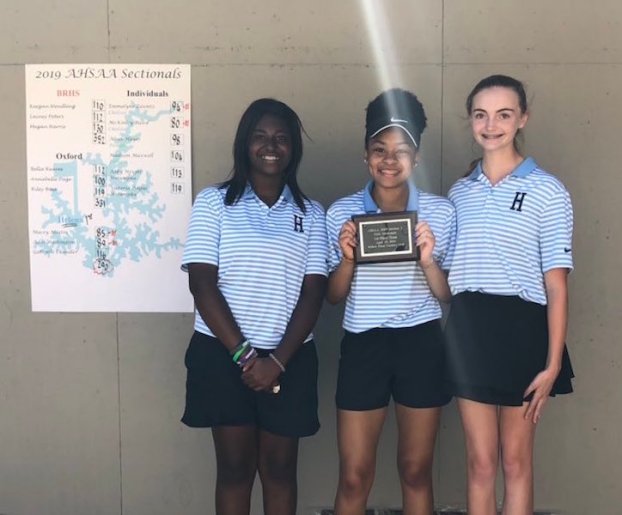 With the state golf tournament coming up May 13-14 and Sub-State set for May 6-7, teams from across the state are starting to prove themselves as contenders, several of which are from Shelby County.

On Monday, April 29, several teams from across the county competed in section championships looking to advance to sub-state, and at the end of the day both Helena’s boys and girls and Briarwood’s boys advanced their full teams to the sub-state round of the postseason thanks to section titles.

Those three championship team were also joined by the Chelsea boys team and other several individuals who advanced from other teams as well.

From Class 7A Section 3 on the boys side, Spain Park’s Matt Stuart advanced after shooting a 71 to tie with Mountain Brook’s Reynolds Lambert, who went on to win low medalist in a playoff.

Also advancing was Vincent’s Miles Fincher, who is just an eighth grader. He ended up shooting a 77 in Class 1A-3A Section 2 to take home the low-medalist honor at the tournament and claim his spot at sub-state.

In the 6A classification, Calera, Chelsea and Pelham each had individual qualifiers, but the highlight was none other than the Helena Huskies.

The Huskies were led by Michael Fain, who shot a 2-over 74, which tied with Calera’s Chase Nail for low-medalist honors. With that strong round of golf from Nail, he also advanced to sub-state. Helena also got a solid round from Gabe Brooks who shot a 4-over 76.

In the girls’ tournament, Helena went on to win the title with an impressive score of 290, which bested runner-up Oxford by 41 strokes to claim the team title.

Chelsea’s McKinley Baird was low medalist at the event thanks to an 8-over par round of 80. Just behind her were Helena’s Macey Martey and Adaj Washington with rounds of 85 and 89.

Baird’s teammate Emmalyne Zaiontz will be joining her at sub-state thanks to a round of 94, which placed her second individually out of the non-team qualifiers.

Also advancing from the section were two golfers from Pelham, as Aleah Hayes shot a 98 and Madison Maxwell shot a 104. That gave the county all four individual golfers advancing outside of the full teams that qualified.

For the Briarwood Lions, it was a tightly contested battle in Class 5A Section 2, but the Lions ended up besting Sylacauga for the team title in a playoff. After tying at 317 following each team’s 18 holes of golf, Briarwood went back out and defeated the Aggies in a playoff.

The Lions were led by Andrew McCarey’s round of 1-over par 73, which beat out teammates Mason Will and Drew Schroeder with rounds of 80 for low-medalist honors.