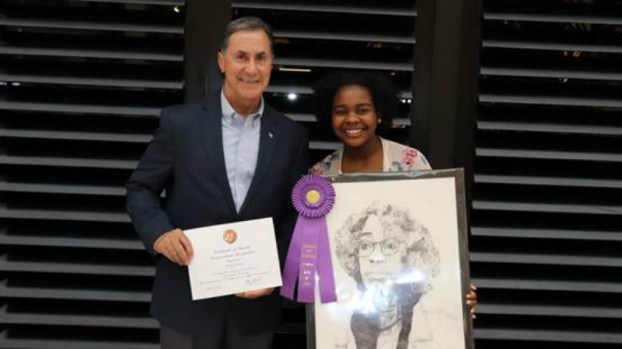 “Every year, I’m impressed by the creativity, diligence, and talent of students around the Sixth District,” Palmer said. “I congratulate Nylah Bluiett on winning the competition this year, and I look forward to seeing her at the National Art Reception in DC this June.”

Each spring, the Congressional Institute sponsors a nationwide high school visual art competition to recognize and encourage artistic talent in the nation and in each congressional district. Since the competition began in 1982, more than 650,000 high school students have participated.

Students submit entries to their representative’s office, and panels of district artists select the winning entries. Winners are recognized both in their district and at an annual awards ceremony in Washington, D.C. The winning works are displayed for one year in the U.S. Capitol.

Sixty-one students from 18 area high schools in Alabama’s Sixth Congressional District participated in this year’s Congressional Art Competition. Their artwork was on public display at the Riverchase Galleria for 10 days.

By NEAL WAGNER / Managing Editor ALABASTER – Area families looking to spend some quality time together while enjoying a... read more