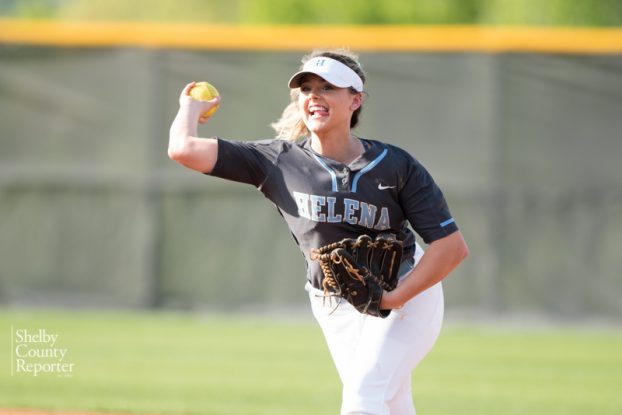 HELENA – The Helena Huskies are moving onto the winner’s bracket in the Class 6A Area 8 tournament after taking care of Calera 8-2 in the opening round of the area tournament on Tuesday, April 30.

The No. 1 seed Huskies got the win behind a solid start from starting pitcher Avery Barnett and scored multiple runs in the middle and late innings to pull away for the win.

After falling behind 1-0, Helena tied the game in the bottom of the first inning on an RBI double by Torie White to score Peyton Wilkins.

Helena wouldn’t score another run until the bottom of the fourth inning when Emily Crowe got things going with a lead-off triple.

After the triple, Kelsi Bargman singled to score Crowe to bring the game to a 2-2 tie. Two batters late, Haley Morris hit an RBI single to give the Huskies its first lead of the game 3-2.

In the next inning, White drove in another run by hitting a solo home run to lead off the inning to extend Helena’s lead to 4-2. Later in the inning, two more runs would come around to score after a Calera error.

Helena’s final two runs of the game came on a sacrifice fly by Crowe, followed by an RBI single by Bargman in the bottom of the sixth inning to make the score 8-2.

After allowing one run in both the first and second innings, Barnett settled in and was great in the circle for Helena, allowing just three hits and striking out four in the complete game win.

White and Bargman both led Helena offensively, going 3-for-4 with two RBIs and two runs scored.

By ALEC ETHEREDGE | Sports Editor With the state golf tournament coming up May 13-14 and Sub-State set for May... read more